[Methinks this graphic will be getting a lot of work during the upcoming congressional session.]

Voters just gave Republicans one hell of a mandate: Stop Obama. Stop ObamaCare. Stop Amnesty. Stop it All.  What did Republican leaders do?  They struck a deal that pretty much gives Barry and his team everything they wanted.

The spending proposal — set to be voted on Thursday — spends $1 trillion to fund the government through the end of September 2015 but only funds the Department of Homeland Security for three months.  So, the GOP will have the majority starting in January.  But this deal gives the Democrats an incredible amount of leverage in setting the budget for the first year of the upcoming Republican era on Capitol Hill.  DHS will oversee the administration of Barry’s executive action on amnesty.  Republicans are promising to go after amnesty when the new Congress starts work.  Fight another day.  That sounds a lot like what we got told about ObamaCare.  *We don’t need to defund anything now.  We can get ObamaCare later.*   ObamaCare is still being funded, BTW.

Let’s look to Politico, the Bible of the DC establishment, for more:

Already, the abundance of policy riders — backed by trucking, mining and securities interests — shows the GOP’s new clout. But the giant measure also reflects a genuine give-and-take with Senate Democrats in hopes of averting a government shutdown veto fight with President Barack Obama.

“The bill will allow us to fulfill our constitutional duty to responsibly fund the federal government and avoid a shutdown,” said House Appropriations Committee Chairman Hal Rogers (R-Ky.). In her blunter style, his Senate counterpart, Sen. Barbara Mikulski (D-Md.), appealed to Democrats to support the measure.
“In today’s era of slam-down politics, we were able to set aside our differences,” she said. “Working across the aisle and across the dome, we created compromise without capitulation.”

House Democratic leader Nancy Pelosi (D-Calif.) — herself a veteran of many past spending deals — withheld any decision but said she was “hopeful” she could support the package. “We have confidence in our appropriators as they have over the last weeks sought to negotiate a position that represents the values of our Caucus.”

OK. So, big-government RINO Hal Rogers, Nancy Pelosi, and Barbara Mikulski are all fans of this deal? Does that make anybody else out there feel a little queasy? MORE:

Prior budget agreements made the task easier since the White House had already agreed to a freeze on domestic appropriations. The Internal Revenue Service and Environmental Protection Agency, two favorite Republican targets, still face real cuts below current spending. But the broader picture is of a largely flat domestic budget with modest increases for scientific research, hiring more immigration judges or dredging the nation’s harbors.
Where big new money is added, it is largely to meet threats from overseas such as the deadly outbreak of Ebola in West Africa or the rise of the Islamic State in Iraq and Syria.

Nothing on the domestic front comes close to the $5.4 billion in emergency funds dedicated to fight Ebola, for example. And where the administration won concessions from Republicans, it was at a price.

After years of effort, the Commodity Futures Trading Commission will finally get a substantial increase of $35 million — bringing its budget to $250 million. And the GOP agreed to also bring the much larger Securities and Exchange Commission up to $1.5 billion, a $150 million increase.
But as part of the bargaining, Republicans won an important concession for the financial industry related to “swaps push out” rules for banks under the Dodd-Frank reforms.

The financial industry wants more protection from federal insurance to protect some of its riskier practices — like those that led to the 2008 financial crisis.  So, this is not exactly a small-government victory MORE:

[…]
Elsewhere, Republicans appeared more circumspect. In the case of nutrition and school lunch standards promoted by first lady Michelle Obama — a clear flash point — the House retreated to compromises crafted by Senate Democrats.
School districts are promised more flexibility in meeting requirements for some items such as whole grain products. But this is far less than the broad waiver that had been promoted in the House.
The bargains struck regarding the Clean Water Act and other environmental issues appeared to require both sides to give ground. Democrats blocked some of the biggest ticket items impacting greenhouse gases.
[…] Eager to go home, Speaker John Boehner (R-Ohio) has said the House is pushing for a floor vote as early as Thursday. Some short-term continuing resolution or CR will be needed to buy more time for Senate action. But the goal is to put most of the government on firm footing, free of shutdown worries through next September.
The sole exception is the Department of Homeland Security, which will be kept on a shorter leash so Republicans can revisit Obama’s immigration policy after Democrats surrender the Senate in January. But there’s no attempt to interfere with the operations of the United States Citizenship and Immigration Services, the office in DHS that is charged with implementing Obama’s recent executive order.
[…]

So, we’re not really fighting the implementation of amnesty, after all, huh? MORE: 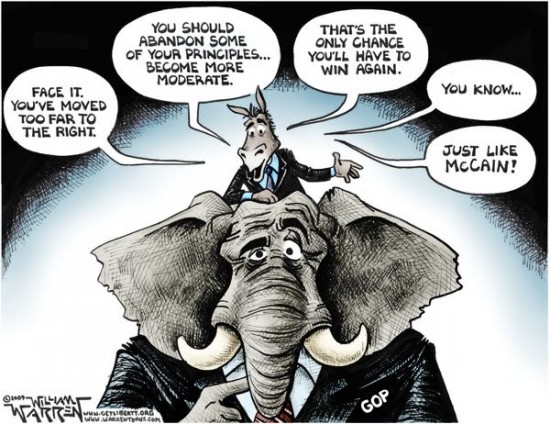 Following is a section-by-section summary of major elements in the spending package:
—The Pentagon is promised $490.2 billion for its core operations and another $64 billion in OCO funds counted outside the budget caps. The OCO number is significantly more than Obama first anticipated last spring and reflects the stepped-up U.S. military operations in Iraq and Syria as well as $175 million to aid Ukraine and Baltic states like Latvia in the face of Vladimir Putin’s Russia.
—The State Department and foreign aid accounts, including almost $9 billion in OCO funds. The extra OCO funds will help preserve what’s become a greatly expanded refugee assistance program of just over $3 billion annually. Almost $1.9 billion is provided in disaster assistance — again heavily dependent on OCO support.

Closer to home, the bill provides an estimated $260 million for a basket of programs to help Central America address some of the economic and social ills that drove the spike in child migrants this past year.[…]
—The cuts from the IRS are the most severe, and the $10.95 billion provided is $346 million below the tax agency’s current funding. This is relatively close to what House Republicans had first proposed and dramatically less than Obama had requested. But as part of the same bargain, the bill drops House language that would bar the IRS from playing its critical role in implementing the president’s Affordable Care Act.
[…]

Gosh. We sure are seeing a whole lot about Democrats getting what they want, and Republicans conceding.  This is JUST a sneak-peek at what ‘holding your nose’ has earned you.

5 thoughts on “The $1T lame-duck sellout”