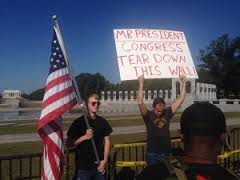 They’re closing beaches.  They’re walling off open-air, unattended monuments.  They’re barring tourists from pulling over to take pictures of Mount Rushmore. They’re cutting off benefits to families of military war dead. American cemeteries in FRANCE are being shut down to tourists.

But the House gym is staying open.  So are all of the congressional dining rooms. (And apparently, Joe Biden’s trip to North Carolina to try and bail out Kay Hagan is considered “essential.”)

We’re getting dramatic, tear-jerking reports about mamas not being able to feed their babies because of mean ol’ John Boehner and his government shutdown.  In reality, this situation is far from a crisis.  The “shutdown” is merely a 17 percent freeze on federal spending. But that IS a crisis to the statists.  They want all of our money, and none of our input.  They want 100 percent control of the pursestrings and our lives — not just a measly 83 percent.

The media is rolling along with this whole distraction about whether this scenario is Barry Obama’s fault or John Boehner’s fault.  The focus should really be on why the spending freeze hits the defense sector — roughly 19 percent of all federal spending — so hard.  You could arguably shut down the Department of Commerce, HUD,  The Department of Education, The Department of Agriculture, The National Endowment for The Arts, and the EEOC and your average American would not notice.

The statists that run the show in DC aren’t really interested in saving money and righting our financial situation.  They’re going to make US PAY for shrinking their share of the financial pie.  Paying rangers to chase away tourists and  to wall off open-air, usually unattended parks and monuments is just petty.  You’re not saving money.  You’re punishing middle America for daring to vote FOR people who refuse to sign over the deed to this country to Barry-O.

The next drama is going to be over raising the federal debt ceiling.  That’s right. We’re already $17 trillion in the hole, and the statists want to keep digging.  Not even a hint of discussion about trimming budgetary fat or fiscal responsibility.  (Of course, how do you trim budgetary fat when you haven’t passed a budget in 8 years?)

I am willing to bet these people in DC DO NOT run their families or private businesses like this. Continuing resolutions are a contemptuous tossing-aside of constitutional requirements for budgets.  THOSE are the top responsibility for Congress — and they can’t even get that right .  Why are we reduced to waiting for Barry, Boehner and Dingy Harry to step out of their negotiations and make a pronouncement?  Why are those 530-plus other folks up there — if this is going to keep coming down to a verdict from those three?

I’ve heard all kind of talking heads on the news — as well as some financial types in person — talking about how bad its going to get if we don’t raise the debt ceiling and avoid default.  HOW can it get much worse?  We’re never going to pay off what we NOW owe.  The dollar is a joke around the world.  Government regulators –armed with their shiny new toy ObamaCare — are choking off economic growth and providing a catalyst for job losses.

Raising the debt ceiling is as stupid as signing up for another credit card when you are already broke with five maxed out credit cards.  It’s kicking the can down the road. Putting off the inevitable.  Digging yourself into a hole that you’ll never be able to climb out of or fill in.

We need some grownups in place who are going to (1) do what the Constitution says, and (2) pass a budget to be sent to the president.  If this bunch won’t do it, we need to find a new bunch that will.

3 thoughts on “Shutdown #18: The Statists Strike Back!”