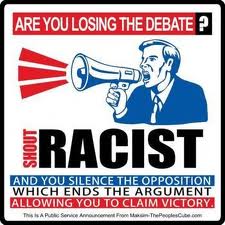 Those of you who live outside The Fayetteville Observer’s circulation area, you probably haven’t become acquainted with Myron Pitts.  For those of you in the Triangle — think of Myron as a poor man’s version of Barry Saunders.

It’s pretty typical for the few remaining legacy newspapers to keep at least one token black columnist with marching orders from their white liberal bosses to spew outrageous nonsense aimed at keeping the “brothers and sisters” riled up and angry at whitey.
The Fayetteville Observer — like the McClatchy papers — is afflicted with a shrinking subscriber base, a dwindling newsroom population, and a greater dependence on AP wire copy, Democrat press releases,  and crime reports. You can get through a whole daily edition of The F-O in under five minutes.  Ol’ Myron offers some of the paper’s rare original content — and his stuff ranges from the predictably leftist to borderline black power screeds.

The Washington Post’s Colbert King is one of the old hands at this type of thing.  The theses of his columns tend to fit one of these templates: (a)  [Conservative idea] is racist and demeaning to people of color; or (b) [conservative / Republican politico] is racist and a threat to people of color.  This crap earns him enough “credibility” to get invited onto the Sunday morning talk shows as a panelist and to get quoted in other mainstream media outlets.

On Saturday, ol’ Colbert published a column comparing The Tea Party movement to The Confederacy. Yep. SERIOUSLY.  (I won’t hold my breath waiting for the column comparing the 1960s antics of SDS or the more modern antics of the Occupy Movement to Russia’s Bolshevik Revolution.)

Apparently Myron — and his bosses at The Observer — took some heat over the tone of Myron’s screed and it’s astonishing similarity to King’s Saturday piece:

On Saturday, Washington Post columnist Colbert I. King posted a piece about the tea party on the Post website titled, “The Rise of the New Confederacy.”

I want to make clear that I had no idea what King was writing about and was quite surprised to see he had used the same terminology as me.

I turn in my Monday columns on Thursday afternoon, as can be verified with Tim White, editorial page editor. There are time-stamps on stories in our in-house operating system that can verify that as well.

I submitted my column on the New Confederates on Thursday, it was edited on Friday, and I didn’t see it again until it was published on our website Sunday night and in our newspaper Monday

For the record, I would never use a phrase that someone else had coined and pass it off as my own. I use heavy attribution in my columns, where it applies. I have enough original ideas without having to take other folks’.

I would also add that I am sure we are not the first two writers to compare the tea party to the old Confederates. The comparison is quite clear to many people conversant with American history.

So, it’s JUST A COINCIDENCE that you have the same exact concept as a national columnist at pretty much the exact same time?

Also, a Google search indicates that Myron, Colbert, and Jesse Jackson are the primary spewers of this whole Tea Party-Confederacy crap.

Now, as for King’s column, a critique.

He and I reached a similar conclusion about the tea party because we both view it as fundamentally a negative force that is anti-federal government and wishes to destroy same.

He appears to leave it there, and that’s where I believe he errs:

He wrote: “Unlike their predecessors, however, members of this group hail from Dixie and beyond, though I stress there is no evidence that the New shares the racist views of the Old. The view on race is not the common denominator. The view on government is.”

I am completely flummoxed that King sees “no evidence” that the New Confederates share the racist views of the old. As I make clear in my piece, these kinds of views color much of the anti-Obama commentary on the right, and it preceded Obama’s election.

I frequently read the conservative websites, not to mention numerous comment sections, including the Observer’s. The racism and race-baiting is laid out right there for you.

I wonder if King reads what people are saying online? Heck, he just needs to read some of the comments on his own column.

He is older than me and knows the racist code words, perhaps better than me.

I believe he is playing the NY-DC media game of being genteel and giving the tea party a break. I wonder would he also say privately that he sees no evidence of racism among the New Confederates?

Seriously?  WHERE — other than Fox News — do you see any DC-NY media outlet going easy on the Tea Party? Myron,  I know you have to step-n-fetchit for your leftist masters, but your zeal to impress them is going from the sublime to the ridiculous.  How does your RACISM thesis mesh with the overwhelming enthusiasm of the Tea Party for figures like Clarence Thomas, Herman Cain, SC governor Nikki Haley,  and Senators Tim Scott, Ted Cruz and Marco Rubio?

Personally, I have no incentive and no desire to coddle these crybabies any longer. The stakes are too high to continue to suffer their tantrum.

As I’ve said before, I believe the tea party solely exists because of Obama and will be largely gone after he is gone.

It’s a shame that people like Myron sell their souls for a prime spot on an editorial page.  He could use his position to address the problem of violent crime in the black community.  The media goes to great lengths — as documented in THIS BOOK — to hide the race of a black suspect, but they bend over backwards to let us know about the offender’s race when a white person commits an act of violence.

Myron COULD use his position of influence to be a positive force for change in his community.  But it’s so much easier — and more professionally beneficial — to do his part to aid the liberal plantation masters in keeping black folks poor, angry, dependent and voting overwhelming as a bloc for Democrats.

One thought on “When you’ve got nothing of value to add — RACEBAIT !!!!”