Team McCrory’s official propaganda organ (state-run media) dropped a headline on us SO PREPOSTEROUS it might as well have said “The fat guy in the red suit really is going to come down your chimney and bring you presents (never mind that we have gas logs and a flue instead of a real chimney).”

Heath Shuler for GOVERNOR?  The former 11th district congressman has already been ruled out as a challenger to Richard Burr in 2016.  (We’ve seen reports that Shuler’s house was up for sale and he was contemplating a move to Tennessee.)  He’s got a pretty good job with Duke Power that lets him still play footsie in Washington.  WHY would he give it all up to go rassle with Tom Apodaca and the boys on Jones Street? 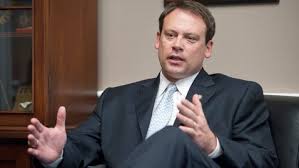 The answer: He isn’t going to, and never was going to.  One of our political pro sources explains it like this:

“That trial balloon was Pat’s camp trying to play with Roy Cooper’s head.  Cooper has been running around raising money and campaigning for Pat’s job at light speed.  He has no significant primary opposition.  Nothing to slow him down or pull him to the left. So, he can sit out there and play the traditional Southern Democrat role — basically blurring the lines between himself and Pat. The governor’s team is basically trying to plant the seed in the heads of the Cooper campaign that a big dog is waiting in the wings to potentially turn the table over in the Democrat primary.  And, it ain’t gonna happen.”