A throng of The Round Rev’s filthy and / or addled followers formed a “half-circle” in Raleigh yesterday. (They apparently didn’t have enough for a FULL circle.)

It was time for the protest of the week.™ :

Demonstrators gathered on the state Capitol grounds to express outrage and anger in the wake of the General Assembly’s passage of a law that would prevent local officials from removing Confederate monuments without approval from the state.

The protesters also criticized Gov. Pat McCrory and state legislators who have not enacted a ban on license plates bearing the Confederate battle flag, particularly after two advocacy groups collected 13,000 signatures on a petition. The petition was delivered late last week, and calls on the governor to eliminate the emblem.

“These Confederate flag and monument issues have shown Pat McCrory to be either totally insincere or completely ineffective in his leadership as governor,” said Gerrick Brenner, executive director of Progress NC Action, one of the groups that spearheaded the petition drive.[…]

Right off the bat, we’re subjected to drive-by malpractice.  First, we’re not treated to an ideological identification of the “demonstrators.” Second, the drive-bys are still not mentioning Mr. Brenner’s real recent stint as an on-camera personality for WTVD ABC11.  Oh, and to put the whole 13,000 signatures thing into perspective — Carrboro’s population is right about 20,000. 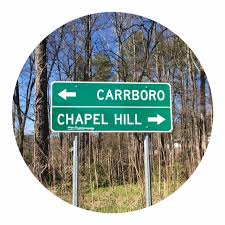 The impassioned gathering of more than 200 protestors formed a half-circle about 50 yards from a Confederate War memorial that was last week spray painted with the slogan, #blacklivesmatter. The Women of the Confederacy monument, on the south side of the Capitol grounds along West Morgan Street, shows a woman seated next to a boy holding a sword. The monument was still covered in yellow police caution tape Monday afternoon.

Many of the protesters, who said they were part of the Moral Monday movement, waved small American flags. Others held up signs that asked McCrory to “show some leadership,” while other signs asked the governor, “Whose side are you on?”

Rev. William J. Barber II, president of the NAACP, said the General Assembly’s passage of a bill to protect Confederate monuments, along with the governor’s refusal to eliminate the emblem from state license plates, is similar to the race-baiting politics employed by Jesse Helms in the previous century.[…]

Hmmm.  No quotes around the words race-baiting politics.  Was this McClatchy reporter quoting The Round Rev or simply speaking his or her own mind?  MORE:

“The Governor and legislature passed this law approximately one month after the Charleston massacre, knowing the kinds of sentiments it would elicit among people who hold white supremacist views,” Barber said.[…]

Never mind that the bill got filed in February.  The fat man is really stretching here — and this drive-by is fawning and cooing as he does it. MORE:

[…]Triangle historian Tim Tyson said he “was weary of a history” that only tells one side of the Civil War story.

Tyson also noted what he described as “cherished myths” that begin with the inaccurate assumption that some 100 monuments on local government grounds across the state were erected to pay tribute to the Civil War, but were instead built to pay tribute to the successful rise of white supremacy and the defeat of Reconstruction.

“Triangle historian”?  How about Mike-Nifong-apologist and Duke-lacrosse-lynch-mob-member?      ANYONE who went all-out bashing the lacrosse team and defending now-disgraced prosecutor Mike Nifong is officially bone-dry on credibility. BONE DRY.

Barber’s NAACP made public a news release before the demonstration that stated the recent passage of the law was “not just about reforms. It underscores the cynical posturing of protecting monuments that represent a racist legacy before protecting voting rights, healthcare, public education, criminal justice reform, living wages, women’s rights, the environment, and all citizens of this state.”

Laurel Ashton, the field secretary of the state NAACP, told whites in the audience they’ve been lied to about the Confederate flag.

“They have been taught to love it, that it is intrinsic to who they are and their place in the world,” said Ashton, who is white. She added that the real tragedy is that many impoverished whites who are waving the Confederate flag are “hurting and dying each day because of the actions of the General Assembly.”

Hmm. This driveby has a hell of a future as a dictationist or court reporter.  No challenges. No tough questions. Just transcribing.  Plenty of over-the-top rhetoric without ANY opposing viewpoints.  And they wonder why no one is watching or reading their stuff anymore.

3 thoughts on “#ncga: It’s Monday. What are we hollerin’ about today?”