It’s interesting to see all of the takes on the happenings so far in Cleveland.  On one hand, you have folks beating on Reince Priebus and the boys for being too top-down and heavy-handed.  Disrespecting the grassroots.

On the other hand, you have folks saying that this effort to unbind the delegates was an authoritarian power grab meant to negate a whole lot of primary votes.  Again, disrespecting the grassroots.

Though, for the longest time in our nation’s history, Average Joes had no say in the selection of party nominees.  Delegates were sent off to various conventions, and the rest of us got told who our choices would be in the general election.

I am for giving the people the most say possible in who the candidates are that get to vie for the honor of being president of the United States.  If the RNC and the DNC had their way, we’d get TWO candidates every four years, completely guided by consultants, with positions on the issues so close together daylight can’t shine through.

Debate and dissension is healthy.  But the time to do that is in the primary season.  Right now, it’s all about coming together and gearing up for war against The Dragon Lady.  (Hillary, not Zan or Joyce.)

I was not thrilled with John McCain or Mitt Romney.  But I recognized they were better than the alternative.  There’s a lot about Trump I like, and there is a lot that makes me queasy.  But right now, he’s what we’ve got.  (What’s the old sports saying?  ‘You play ball with the team you have, and not the one you wish you had.’)

Choosing between Trump and Hillary?  DJT all the way.

MELANIA’S SPEECH.   I caught Mrs. Trump’s speech after the fact on YouTube.  It was what I thought it would be — a lot of cutesie boilerplate. ten minutes of nothing.  A classic political speech.  (I can remember following certain candidates around on the campaign trail, as a driveby, and 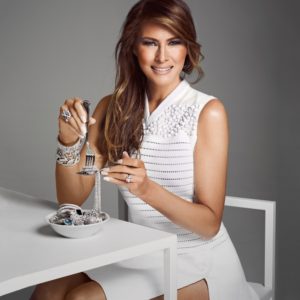 hearing the same same same empty speeches over and over again.  I’d see the crowds go wild each time that speech gets delivered, and wonder ‘What the hell are they cheering for?  The guy didn’t say a damn thing.’)

The drivebys have gone bat-$h!t crazy this morning claiming that Mrs. Trump plagiarized that legendary orator Michelle Obama.  (Meanwhile, they are still praising vice president Joe Biden, who actually has a hand in crafting policy, as the best vice president EVER.)  Much of the caterwauling comes from angry, frumpy driveby-ettes jealous that they will never look as good as The Next First Lady.

I’ve been on the inside of political campaigns too. And I hate to break it to you, but most of these guys and gals DON’T WRITE THEIR OWN SPEECHES.  There are a lot of people floating around DC who get paid well to make these people sound, um, “good.”  And that pool of people gets around between campaigns — even playing both sides of the aisle. It’s very likely that some of the same people who had a hand in writing Mooch-elle’s speech had a hand in Mrs. Trump’s speech.

If Mrs. Trump had started claiming she was a coal miner, I might have gotten worried.

AN ANGRY YOUNG MAN.   Can anybody help out here?  WHY, WHY was the NCGOP executive director screaming at this poor, defenseless cowboy hat-clad woman inside the convention yesterday? (see accompanying photo) 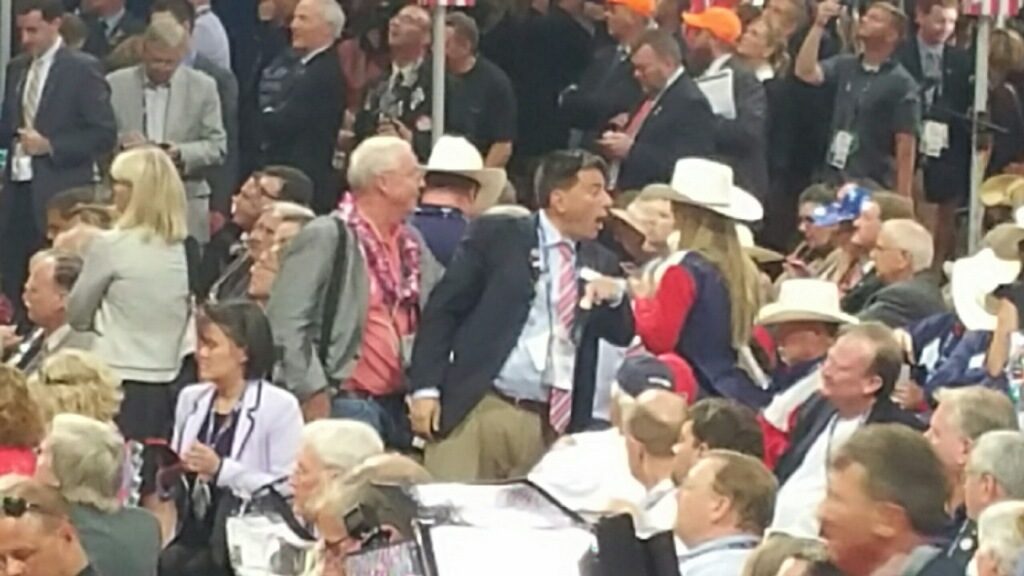 Mr. Woodhouse sure is making life easy for the Democrats.  When they start claiming the NCGOP is hostile to blacks and women, they can point to (1) his treatment of Hasan Harnett, and (2) his treatment of this woman.

21 thoughts on “#RNCinCLE: The heavy hand. Melania’s speech. And WHY is Dallas Woodhouse so angry?”