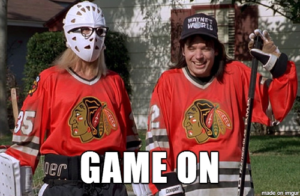 Well, the Cleveland garden party is pretty much over.  The freak show in the streets outside the arena now moves on to Philly — another city I’m not exactly jonesing to spend quality time in.

I found it, un,  *GREAT* to hear about appointed NCGOP chairman Robin Hayes complaining about Ted Cruz and back-stabbing.  If there’s ANYBODY who ought to know about dirty deeds done dirt cheap and back-stabbing, it’s Robin.   Hayes made way too much news at the convention — from yanking Bob Orr’s credentials to stranding two delegates in Cleveland.

There’s been a lot of discussion — especially on this site — about the content and merits of the speech by Ted Cruz.  Again, you get no argument from me on the point that Cruz has been solid for conservative principles during his time in DC.  He made some good points in his convention speech. It would have been even better in front of one of the state primary contests.

THOSE are over.  Trump is the clear winner of the nomination.  Your next president will be either Hillary Clinton or Donald Trump.  Trump is still an enigma on a lot of issues.  But what I DO KNOW about him beats the hell out of what I DO KNOW about Hillary. Those who are still fighting the good fight for Cruz are kind of like the football team still running plays after the stands have cleared, the cameras have turned off, and the fans and the opposing team have left.  It’s good practice, but pointless.

You can pout all you want and stick with “Ted in 2020” — but you may have to wait until 2024.  Hillary could be in there for two terms.  Barry got two.   (And Ted MAY lose his 2018 race in Texas.) You may be willing to roll the dice on another president Clinton, but I sure as hell am not.  Our nation is in a pretty precarious state.  I don’t know that it can survive more, or worse, than what we’ve seen from 1600 Penn since January 2009.

speeches are not great indicators of what we’re going to get after the inauguration. In 1988, George H.W. Bush sold us on him being an extension of Reagan.  Not even close.  Obama promised a post-racial America and scuttling of international trade deals sucking our jobs overseas.  How’s that worked out?

Reagan, in 1980,  promised us great revolution in our capital city.  We got a little of it through 1983, but the GOPe hijacked him and put an end to all of that talk.

It was also comical to see all of the photos of Thom and Susan Tilli$$$ attaching themselves to Trump and his family like remora fish on the belly of a shark. Those two did NOTHING for Trump in the runup to the convention.  Ol’ Thom even endorsed ”Little Marco” a matter of days before he abandoned the presidential race.  Both Richad Burr AND Thom Tillis had previously been quoted as refusing, or being non-committal about campaigning in NC with Trump.   Both were quite invisible at Trump appearances in the state.  Now, they’re both apparently excited about campaigning with Trump.  *Hmmm.  DJT’s poll numbers in The Tar Heel State must look a lot better than we thought.*

Jumping on the Trump bandwagon at the last minute sure did wonders for Renee Ellmers, didn’t it?