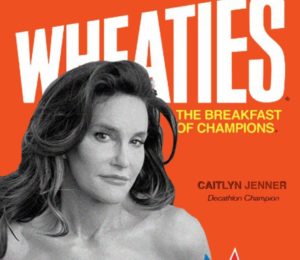 They’ve got the driveby media, public education, science, government, BIG business, and are tightening their grip the American male’s most cherished treasure — SPORTS.  For years, there was nothing like crashing in front of the TV with the guys amidst heaps of adult beverages and junk food to catch THE GAME.   Just like the Saturday golf game, it was always the opportunity for male bonding.  Telling those jokes you don’t DARE utter within earshot of the missus.

Now, the crowd that has sucked the fun out of every other aspect of life is trying to finish off the world of sports.  Yes, those Obama-voting, Prius driving metrosexual social justice warriors are sinking their claws into the last bastion of manliness left on Earth — SPORTS.  I don’t know how many times I’ve watched a game where ESPN tosses to some female correspondent in the stands to do a human interest story on the quarterback’s girlfriend whIle a HALF DOZEN PLAYS ARE BEING RUN ON-FIELD.  (I tuned in for the action on-field or on-court.)

ESPN has an awards show called the ESPYs.  They have a yearly show featuring a lot of Hollywood and sports types.  And it is always loaded with a lot of leftist commentary.  This year, we got a lot of preaching during the show about Black Lives Matter and those *mean ol’ cops.* 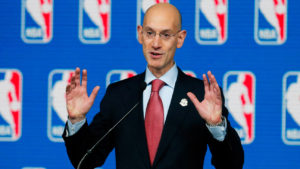 Long-time color commentator Bob Costas has taken it upon himself to lecture viewers about gun control and other liberal issues.

ESPN has run off Rush Limbaugh and Curt Schilling for daring to be conservative, but that race-baiting, Obama-licking, loud gasbag Mike Wilbon still has a daily show there.

We’ve been saddled with this WNBA thing.  Girls playing basketball.  (Um, yay?)  I’ve flipped by a few of these games.  The stands are almost always barely occupied.  Same for college women’s games.  Yet, we get saddled with them.  Because the SJWs call the shots at ESPN and other sports media.

Now, the NBA is jumping into politics — yanking the All-Star game from Charlotte because of HB2. Granted, I haven’t actually watched an NBA game in its entirety since the days of Dr. J, Bobby Jones, Larry Bird, Magic, Kareem and James Worthy.  The institution has devolved from class acts like that to basically, um, the prison yard.   There’s no teamwork.   There IS a whole lot of selfishness.  Get your 50 points, your bonus, and your endorsements.  Screw the fans. 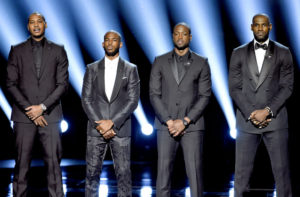 I’d much rather watch ACC football and basketball.  Those guys still care about not letting their teammates or their schools down, and giving their all.

My amigo BobLee hit the nail on the head about the All-Star game in his latest column.   Not a whole lot of people in our great state (outside the Mecklenburg county line) gave a hoot about the first iteration of The Hornets, The BobCats, or this latest version of The Hornets.  WHY would you when we have FOUR of the top college conference’s schools right here in our backyard?  Duke v. Carolina, or State v. Duke, or State v. Carolina, or Wake v,. Duke, Carolina, or State — or Charlotte v. Portland?

Most basketball fans don’t give a hoot about Steve-in-a-Dress’s trauma over not being able to use the ladies room. They just want to see some good ball being played.

Sports are arguably one of the few consistently unifying activities in life. As a conservative, I am outnumbered exponentially when I travel to Chapel Hill to cheer on the Heels. Sports are some of the few things I can talk to leftists about without the potential for fisticuffs.  For a few hours each week, we’re cheering for the same team.

With this ONE aspect of life — please lay off the force feeding of the social justice slop.  Give us back SPORTS.

40 thoughts on “Give me BACK my sports.”