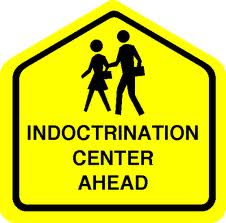 If you’ve ever wondered why your kids come home from school spouting leftist nonsense that runs afoul of your family’s values and teachings, a letter from a retired social studies teacher to our thrice-weekly local paper here in Moore County explains A LOT.

Paul Ericson — who according to his byline is “a retired social studies teacher at Pinecrest High School” who ” previously served with the U.S. Army and the Central Intelligence Agency”   — offers us a less-than-scholarly diatribe about what he sees as fascism on the rise:

We all remember the Colonial rallying cry “no taxation without representation.” It wasn’t about taxes per se: The Colonists believed – since they were not represented in England’s Parliament – that they were not obliged to follow English laws.

Um, there was  a little more to it than that.  A legislative body in a far-off city was slapping oppressive regulations and taxes on the American colonists against their will.   (Sound familiar?)  British soldiers were kicking in doors of colonists’ homes taking what they wanted, and sometimes forcing homeowners to allow soldiers to live there.  If the soldiers were hungry, they helped themselves to your crops or the food on your table.    The people who had “skin in the game” were being abused and run over by distant political forces.

A democracy exists when citizens combine to agree to follow the laws established by a government that they collectively vote into office.

For the record,  we have a “republic,” and not a “democracy”.  Just to clarify, here is  the definition:

A republic is a form of government in which the state is considered a “public matter” (Latin: res publica), not the private concern or property of the rulers, and where offices of states are subsequently directly or indirectly elected or appointed rather than inherited. In modern times, a common simplified definition of a republic is a government where the head of state is not a monarch.[1][2]

The system is very imperfect, and there is often vehement opposition by those who have to abide by decisions they personally do not agree with. At the end of the day, however, disappointed citizens comply with unpopular laws while holding out the hope of changing these laws in the future. Witness the rallying cry of electing Mitt Romney to kill Obamacare.

It naturally follows that a democratic government would ensure that as many citizens as possible are eligible to vote. Indeed, America has been defined by a continual broadening of the electoral base, providing more and more citizens with access to the voting booth.

Let’s just give a ballot to anyone who wants one! As many as they want! Let’s further devalue American citizenship!   Read On:

First, the burden of being a property owner was relaxed in most states early in the 19th century, allowing for the election of Andrew Jackson, the “people’s president.”

Constitutional amendments were subsequently passed ensuring, in order, the voting rights of black men, women and all individuals over 18. Pursuant to the Voting Rights Act of 1965, the federal government monitors state actions that could unfairly restrict the right to vote.

Today, felons constitute the largest class of citizens who are often denied the right to vote by their respective states. Currently, almost 6 million individuals have thusly lost the right to vote. (The Supreme Court has upheld the rights of states to exclude their felons as long as the practice is not found to be racially discriminating.)

One can make a reasonable, albeit debatable, case for keeping felons out of the voting booth, but the spate of laws passed by states to tighten voting requirements are another story altogether.

By cutting back on early voting, making voter registration more difficult, and insisting upon official photographic identifications, many state governments have recently sought to limit the participation of certain segments of society, segments that just happen to have a tradition of voting for Democratic candidates.

It is not coincidental that these restrictions have been put in place in states controlled by Republican legislatures and governors. For example, Florida’s 2011 law made it next to impossible for longstanding voter registration efforts – such as those by the League of Women Voters and Rock the Vote – to continue. The law also called for a purging of voter lists using data proved to be dated and erroneous.

In Pennsylvania, roughly 9 percent of registered voters currently lack the appropriate identifications that – due to a March 2012 law – will now be required in order to vote in this fall’s elections. Most of these individuals, it is believed, are traditionally Democratic voters who live in the city of Philadelphia.

How do you lawfully operate in society without a photo ID?  if the police ask for your ID, and you don’t have one, you can be detained until they determine who you are.

The expressed rationale behind such moves has been to cut down on voter fraud. Importantly, however, there is no evidence that voter fraud takes place even at the minutest level. Let’s be clear on this. A movement to tighten up voting restrictions is based on a totally false premise.

No evidence?  Speaking of Philadelphia, what does Mr. Ericson think about the Black Panthers who stood outside a polling place in that city in 2008 brandishing weapons and threatening “whitey”?  There was plenty of “evidence,” but Obama’s crony — and current AG — Eric Holder — refused to prosecute.

These restrictions could well make a difference in this fall’s presidential election. Indeed, that is their intent.

“Last month, the state’s House Republican leader, Mike Turzai, included it in a checklist of conservative legislative accomplishments,” The Washington Post recently reported. “As he told an audience to resounding applause: ‘Voter ID, which is going to allow Romney to win the state of Pennsylvania, done.'”

But what does this say about the commitment of the Republican Party to a democratic government? Are they willing to throw the baby out with the bathwater?

*SIGH*.   Most mainstream people have ZERO objection to having to PROVE — without a doubt — who you are prior to being handed a ballot at a polling place.   (I don’t know how you function in our society without SOME WAY to prove who you are.)   Look at ALL of the things you  have to show your  ID to do.   Buying beer is not so vital.  If  some teenagers or underage college kids get their hands on some beer, it’s not the end of the world.

I would argue that Mexican citizens or other foreign nationals  — or American political activists —  voting under multiple names at multiple places is a threat to our national security.  Making people show a legal form of photo ID to ensure American citizens are lawfully voting is very reasonable.  Without a photo  ID requirement, we have a substantial bloc of individuals making a mockery of one of our most sacred institutions.

What is the commitment of almost 6 million felons to federal and state laws when they have no say in the process? Should Gov. Romney win the election by just carrying states where voters were excluded from the polls, what will be the commitment of the disenfranchised voters to state laws enacted by legislatures that were voted into office without their participation?

Um, I hate to break this to you, but these people BECAME FELONS because they previously showed no respect for the laws of the land.   I shudder to think of the electoral decisions made by Charles Manson.  He’s a convicted felon.

By the way, it is possible for convicted felons — who have shown a clear record of good behavior for an extended time after release from prison — to petition to get their voting rights back.

At the end of the day, individuals prohibited from having a say in the making of laws have far less “ownership” of the laws that are enacted and far less of a moral obligation to obey them.

This letter writer is clearly having a panic attack about what is clearly looking like a landslide loss for Obama.

This guy – -and the woman teacher in Salisbury who screamed at her student for “disrespecting” Obama — are prime examples of  what’s wrong with public education.  This guy – who apparently taught government and social studies — is showing an appalling ignorance of  U.S. history and government.

How frustrating is it that we are forced to keep shoveling tax dollars onto a failing public school system that doesn’t prepare our kids for the real world and force-feeds them far-left pabulum like what this guy is peddling?