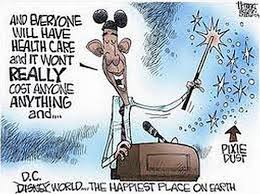 Kay Hagan, Harry Reid and Barry Obama all sold us on how great this ObamaCare stuff was going to be.  We could stay with our doctor if we like him or her.  We could keep our health plan if we like it.  The enrollment promotional commercials claim there will be lower rates.

Ah, reality truly does bite.  North Carolina is one of the hardest hit states in terms of policy cancellations and premium increases. While Hagan has been out front telling us how much we’d like ObamaCare — if we only took time to get to know it better — Insurance commissioner Wayne Goodwin has been invisible, until recently, on the matter.  (Note to staff: save space at the bottom of this story in anticipation of that ONE guy who regularly writes us about how much good the commish does for the people of North Carolina.)

Goodwin is now following the game plan established by Hagan and the DC Democrats suggesting that things would be sooooo much better if the web site worked, and the PR around the rollout would have been better, and those dastardly insurance companies hadn’t kept selling those non-compliant plans.  *We didn’t tell them to cancel the plans.*

Barry, Wayne, Kay and the gang have, um, encouraged insurance companies to keep those non-compliant policies in place until 2014.  Why 2014?  Something interesting happening in 2014?

By the way — Wayne is going to bat for the home folks:

But on Friday, North Carolina Insurance Commissioner Wayne Goodwin announced his office would expedite the process for approving the old plans for the coming year.

“Normally, we’d receive data from insurance companies for filing each year, and we conduct a review to make sure rates are in compliance with the law before folks could use them,” Goodwin said in an interview Friday evening. “Usually, the process would take months for my actuaries and other experts at the department to do that review.”

Goodwin said his department would approve the plans for now and then retroactively review them to see that they are in compliance with state law.

“The process requires insurers to attest to their compliance. But if we discover that carriers overcharged policyholders, or it’s determined by the department that a carrier is non-compliant with the law, we may hold them to some kind of administrative action,” Goodwin said.

But,um, WAIT.  These plans you are demanding to be reinstated ARE illegal under ObamaCare. And you’re going to penalize these companies if these illegal reinstated plans cost more than you think they should cost? *NICE.*

We were told — and are currently being told in commercials — that we can keep our doctors, plans and get lower rates.  We’re finding that we can keep our plans — until after the 2014 vote — and won’t be getting lower rates.  Blue Cross gets to jack up their rates NOW.  And when O-Care fully kicks in, they’ll be the only choice for people going on the health care exchange. *oooh.  There’s lotsa incentive to lower prices when you have NO competition.*

O-Care depends on young, healthy people signing up and covering the cost of treating older people.  The young aren’t signing up.  Guess who gets to cover the shortfall?

I’ve got news for Wayne, Kay, Barry and Harry: The problem is bigger than fixing that stupid web site and improving the process.

The politicians and bureaucrats are jacking up the standards / requirements and claiming quality will improve and things will cost less  WHEN in the real world does that actually happen?

Grab those ankles, close your eyes, and start praying, folks.  This ain’t even close to being over …