Politifact NC COULD have had a field day with all of the lies surrounding the campaign for ConnectNC.  But they decided to stick with their time-tested double-talk nonsense like, oh, THIS: 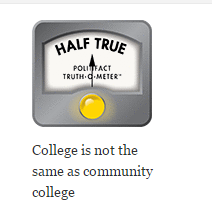 If it’s not the same as college, then WHY call it college?  What the hell is it, then?

Politifact got here via an attempt to help Roy Cooper at the expense of Pat McCrory:

[…] “Just like Bev Perdue, Roy Cooper won’t say how he will pay for ‘free’ college tuition,” McCrory said in a Facebook post. That claim and ones lik

e it have since been repeated often by the McCrory campaign.

Perdue did indeed propose free tuition plans, and in their 2008 campaign McCrory criticized her for them. She shelved them just days before she was sworn in, citing the worsening recession.

Free tuition?  Kinda like all of that ‘free’ money that comes with ConnectNC?  (Are they going to really make me pull out that lecture about how NOTHING the government does is free for the gazillionth time?)  MORE:

But we were more curious about what McCrory had to say about his current opponent. Does Cooper really propose offering free college tuition? And does he lack a plan to pay for it?

Luckily, finding the answers didn’t require us to go back to college for another costly degree.

First, the promise of tuition

Wow.  Talk about shades of ”depends on what your definition of the word ‘is’ is.”  This sounds like it was written by some snot-nosed liberal elitist from Chapel Hill fresh out the sociology department’s curriculum.  Never mind that they teach stuff in community college that you can actually use to go out and make money with. Bill Gates and Steve Jobs did pretty well for themselves with absolutely NO COLLEGE DEGREE.   (What a complete ass.) MORE: 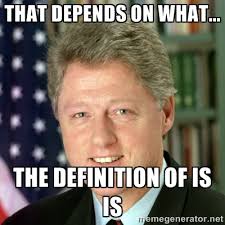 Cooper promises in his plan – which is available on his website – “to design a proposal for North Carolina to offer free tuition for community college.” His plan doesn’t mention anything about making four-year colleges or advanced degree programs free.

Furthermore, free community college tuition is already partially in place, at least for enterprising teenagers. Anyone who’s enrolled in a public, private or home-school high school and has a B average can take community college classes for free – a program called Career and College Promise that Perdue started in 2011, with support from the Republican-led legislature.

Cooper is proposing to expand the availability of free tuition to everyone, though. That’s a lot of people, but not nearly as many as if he were proposing free tuition for college in general, as McCrory implied.

So, are all of those administrators and professors working for free?  Volunteering?  Who is paying the utility bills for the campus?  The salaries?  I mean, it is *FREE.*

One thought on “Politifact: Community College is NOT THE SAME as college. (Wow. Just … )”