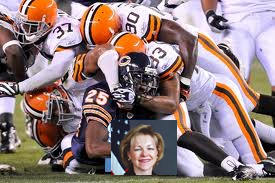 Make no mistake — we are NOT exactly “fans” of the welfare state here.  In our opinion, the NC Department of Health and Human Services (NCDHHS) could collapse into a giant sinkhole — never to be seen again — and the world would be a better place.

But the media-performed colonoscopy being performed on Dr. Aldona Wos, the current NCDHHS secretary, is no longer teetering on the brink. It has fallen head-first into a bottomless pit of outrageousness.

I think scrutiny of the bureaucracy is great.  But it needs to be evenhanded — just as tough on Democrats as Republicans — and FAIR AND TRUTHFUL.

McClatchy and WRAL have followed leftist maniac Chris Fitzsimon’s lead in attacking various personnel moves at DHHS.  It’s like Democrat administrations NEVER made an eyebrow-raising personnel move.  Of course, previous Democrat administrations were loaded with press aides who formerly worked in the McClatchy and WRAL newsrooms.  You weren’t about to have Raleigh’s drive-by media causing problems for their former co-workers firmly ensconced in their new high-paying state jobs.

I know some folks who know Aldona Wos personally.  They describe her as tough, prickly and demanding — very Type A. She’s not the type to brown-nose Rob Christensen and Laura Leslie.  But does that warrant the one-sided, agenda-driven coverage of Wos during the past eight months?

Today, McClatchy published an interview with Bill Atkinson, the boss at WakeMed, talking about all of the problems that the McCrory administration and NCDHHS are causing the health care business in North Carolina.  The article didn’t contain one mention of the problems WakeMed’s being caught red-handed committing Medicare fraud caused taxpayers.

Central to the WakeMed boss’s complaints are problems reportedly stemming from the deployment of a new computer system at NCDHHS.   Go back to January, and you will recall Gov. Pat McCrory talking about the problems with state government IT systems and predicting scenarios like what Atkinson is describing:

McCrory cited audits of the effort to consolidate state information technology systems in his determination that the systems “are broken in almost every department.” IT problems are most alarming in the Department of Health and Human Services, he said, where they could affect the distribution of food stamps and Medicaid.

“If this new system is not implemented in the way it was initially designed, then we’re going to have some major issues in July regarding our citizens getting the needed services from state government,” he said at a news conference. […]

“It is clear we have to modernize and digitize state government,” McCrory said in announcing Estes’ appointment.

Some computer systems aren’t working properly, and no back-up systems are in place, he said. […]

The cabinet also talked about problems with state government buildings. McCrory said many offices are “in total disrepair” after years without adequate maintenance, and some departments are so scattered among different buildings that they cannot work efficiently.

Some buildings also have security concerns that need to be addressed, but he declined to be more specific.

“The longer it takes to maintain and fix these buildings, the more expensive it’s going to get for the taxpayers,” he said. “Before we build new buildings like we have for the last five years in state government, we better take care of the ones we have. … We build new things without having sufficient operations money to run them.”

McCrory said the IT and infrastructure issues weren’t the result of the Perdue administration. Rather, they were problems decades in the making.[…]

Exactly. We had the Democrats running state government for decades. Now comes the first GOP governor in 20 years, and it’s ALL HIS FAULT.

All of this recent moaning about McCrory and Wos’ personnel decisions made me think back to an item we published on this site in January:

The McClatchy Gang and the other remnants of the mainstream media in North Carolina have heaped praise on Boss Bev for allegedly leaving town in a graceful and dignified manner when Gov. Pat moved in.   I had an interesting conversation today with someone intimately familiar with the inner workings of the new administration in Raleigh.  This source was steamed — to put it mildly.  Apparently, Team McCrory has discovered a rather nasty surprise Bev and her team left for them.

According to my source,  Bev made scores and scores of appointments and personnel shifts the day before her last day in office.  My source says Team Bev installed loads of allies in positions normally reserved for the incoming governor to fill.  In just ONE state agency ALONE, Team McCrory has discovered at least three dozen of these last-minute hires / transfers.   In one case, a person — whose qualifications for the job are unknown — was apppointed by Team Bev as budget director for a cabinet-level agency.  In another case, a new McCrory hire walked into his office on the first day and found someone else there — who had been installed in the same job by Team Bev.

So, what’s the problem, you ask?  Why don’t the Republicans just remove all of these people?  My source tells me that a lot of these Bev hires  / transfers are veteran state employees who can’t simply be terminated.  You have to FIND them another state job.  So, you have to keep the Bev ally as agency budget director, or find another slot to put them in so you can bring in your OWN budget expert.

It looks like we have an intricate effort to sabotage the McCrory agenda from within.

So, while WRAL and McClatchy want to coo over Bev’s “classy” departure, the reality looks a whole lot more like pettiness and vindictiveness.

Kinda puts McCrory’s decision to remove protection from some state employees in perspective, doesn’t it?