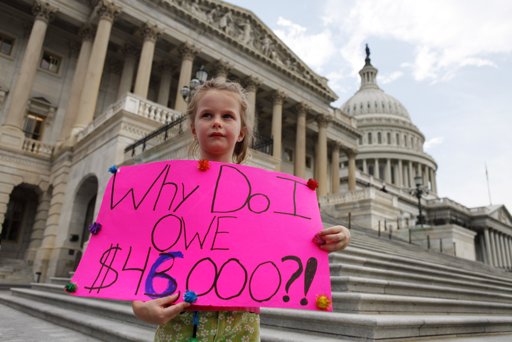 Disgusting.  Just disgusting.  The Republican-controlled U.S. House of Representatives approved a historic $2.4 trillion increase in the federal debt ceiling.  The “honorables” proceeded to applaud and cheer the vote results.  I never thought I’d see the day where the North Carolina General Assembly was more conservative and responsible than the U.S. Congress.

They even hauled in poor Gabrielle Giffords (D-Arizona) — who was shot in the head seven months ago — to cast a vote on this debacle.  It’s doubtful that Giffords was even aware of her surroundings or what she was doing.

I keep asking this question:  HOW does accruing trillions in debt make our country stronger?

It actually strengthens the hands of incumbent politicians and others in The Ruling Class.   These people have been buying our love with our own money for decades — like an estranged absentee  parent trying to woo his / her kids with heaps of new toys and video games.  This deal allows them to keep the scam going a little longer.

We’re idiots for falling for it.  We’ve allowed these scalawags to run up the credit card bill SO high that it will NEVER be paid off.  Our great-grandchildren will be paying this debt.  These rogues in DC don’t care.  They get to keep buying our love.  They get their pockets lined by special interests, in exchange for giving the special interests this borrowed money.  They get to stay on the dole.  The rogues can come home and tell us they are fighting for “us” and getting “our” checks for us.  They can bombard us with mailings and radio and TV ads financed by tax dollars and millions in special interest money.

Those of us who fought hard under the aegis of The Tea Party to change Washington in 2010 are understandably dismayed.  Many of the people we championed in the elections turned their back on us by voting for this sham.

If this “deal” fails — the world will not end.  It will merely force the federal government to make tough choices about what to fund and what not to fund.  Kinda like what you and I do each month.  We check our balances, and make our purchase decisions based on HOW MUCH WE ACTUALLY HAVE.  But you don’t HAVE to do that when you have printing presses that can print more money when your balance gets a little low.

The Ruling Class claim this deal is good because of all of the “spending cuts” included in the deal.  There will be no spending cuts.  Spending IS job security for these people.  If you don’t believe me, look back at the 1982 TEFRA deal and the first President Bush’s deal with congressional Democrats in 1990.  We’ve seen this nightmare before.

You have to give kudos to the legislature in Raleigh.  They heard what we said in 2010, and are — for the most part —  acting on it.   DC is going to require more work.  We cannot keep groveling to these people, thanking them for “our” checks, while they drive this once proud country into the ground.