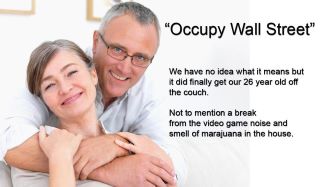 The alleged mainstream media is trying to hard to compare these idiots running amok in New York’s financial district to The Tea Party.  (Never mind that there have been over a thousand arrests, compared to NONE at Tea Party events.)

The American media also drags out comparisons to the Woodstock-era hippies they so admire.  To find out the real truth, you have to turn to the British press, and articles like this one in The Daily Mail:

This are the shocking scenes that have led some people to accuse the Occupy Wall Street protesters living rough in New York’s financial district of creating unsanitary and filthy conditions.

Exclusive pictures obtained by Mail Online show one demonstrator relieving himself on a police car.

Elsewhere we found piles of stinking refuse clogging Zucotti Park, despite the best efforts of many of the protesters to keep the area clean.

The shocking images demonstrate the extent to which conditions have deteriorated as demonstrations in downtown Manhattan enter their fourth week. Further pictures seen by Mail Online have been censored, as we deemed them too graphic to show.

According to eye witnesses, when people ran to tell nearby police about the man defecating on the squad car they were ignored.

Standing downwind of the piles of rubbish, bankers walking past the man did a double take before hurrying away.

Brookfield Office Properties, which owns Zuccotti Park, the site of the New York demonstration, have already railed against protesters, who they claim are creating sanitation problems.

‘Sanitation is a growing concern,’ Brookfield said in a statement.

‘Normally the park is cleaned and inspected every week night. . . because the protesters refuse to cooperate. . .the park has not been cleaned since Friday, September 16th and as a result, sanitary conditions have reached unacceptable levels,’ CBS News reported.

Although many of the protesters are understood to be making strenuous efforts to clean up after themselves, after three weeks of occupation, the strain of hundreds of people living on the street has begun to take its toll.

The authorities today warned of a dramatic crackdown on Wall Street demonstrators, as the protests spread across America.

NYPD Commissioner Ray Kelly has promised that if protesters targeted the police, authorities will respond with ‘force.’

Kelly blamed activists for starting the skirmishes with police that led to 28 arrests yesterday.

Most were arrested for disorderly behaviour, CBS News reported.

‘They’re going to be met with force when they do that — this is just common sense,’ Kelly said.

‘These people wanted to have confrontation with the police for whatever reason.  Somehow, I guess it works to their purposes.’

Mayor Bloomberg added his voice to the furore, accusing the Wall Street demonstrators of putting the city’s economy at risk, the New York Post reported.

He said: ‘What they’re trying to do is take the jobs away from people working in this city.

‘They’re trying to take away the tax base we have because none of this is good for tourism.’