This is how they got the name “drive-bys.”  They show up at a story, cause a lot of chaos, and then speed away.  Someone else is left to clean up a mess.  Just like a real-live driveby shooting.

The current M.O. of The N&O political reporters is to throw something inflammatory (and about 20 percent accurate) out there on social media.  It goes viral and causes all kinds of chaos.  And the newsroom  weasels can sit there whistling innocently like Bart Simpson: “Nobody saw me do it. Can’t prove anything.” 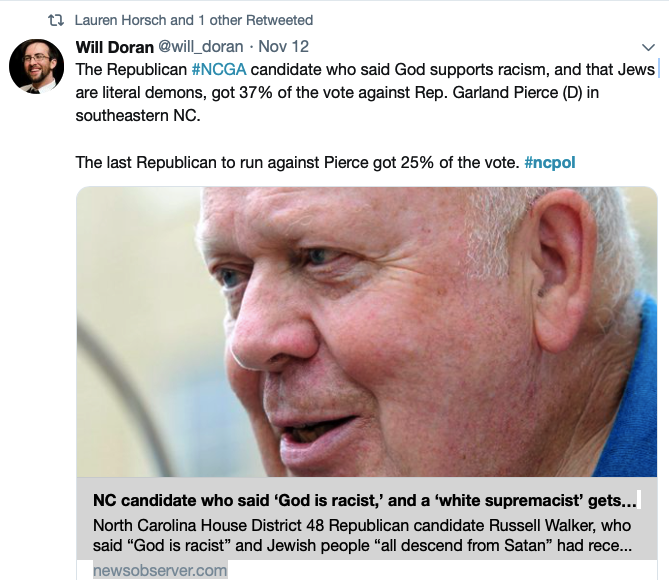 TRANSLATION: *”Oh, giggle, giggle.  Look what those bigoted Republicans in  the sticks did.  See? We warned you about this.”*

Actually, the drive-bys made a little noise about Walker in June, and then dropped it. As we all know, most voters have the attention span of gnats.  (i.e., electing Anita Earls, the leading opponent of voter ID while approving a constitutional amendment allowing for voter ID, electing Bob Steinburg despite his indicted aide and his sketchy payoff from Currituck County.)

We decided to jab this particular weasel a little about just what he was trying to pull:

answer the question about WHY they would support Anita Earls — who sued to kill voter ID and argued passionately against it — and then vote FOR voter ID.  Perhaps it is another indication that most voters don’t pay attention.

Doran and his co-smearers neglected and / or downplayed some key points about the whole GOP and Garland Pierce thing.  Pierce’s last GOP opponent came in 2010 — prior to the current district configurations.  Here were those results:

And here were the 2018 results for Pierce:

As we said before, there has been some substantial redistricting since 2010.

I am willing to bet that voting against Pierce and being a bigot are NOT mutually inclusive.  I’m from that neck of the woods, and have watched Pierce since he’s been in Raleigh.  He’s basically been a bump on  a log collecting per diem.  Even under a Democrat majority.

Drive-by Doran attempted a little CYA on this yesterday, while everybody was off work and not paying attention:

Did Walker campaign with a bunch of KKK talking points?  Was he burning crosses? “Gawrsh, idunno,” is not acceptable from the crowd that claims to be our eyes and ears and protectors of our democracy.  Is it too much for us to expect that you KNOW before you write stuff?

Interestingly, we’ve heard not a peep out of the newsroom punks about local and state

Democrats embracing The Nation of Islam in places like Durham, Fayetteville and Charlotte. Nor have we heard much about Keith Ellison — Nation of Islam acolyte, DNC official, and accused woman abuser — being an honored speaker at the NC Democrats’ annual dinner.  (You ought to hear some of the unpleasantness uttered from these Nation of Islam folks about Jews and white people.)

Nice try, punks.  Stuff like this is why your parent company is bleeding money and why your newsroom is gradually emptying out.