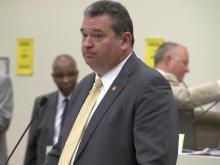 He took $400,000 from his donors for personal use, but only got a slap on his manicured hands:

After admitting to financial crimes like not paying taxes — as part of a scheme to take hundreds of thousands of dollars from his political supporters for his own personal use — a powerful North Carolina politician will avoid prison.

Instead of prison time, prosecutors say, former GOP Rep. David Lewis will have to pay a $1,000 fine and avoid getting in trouble again for the next two years. […]

Sources had reported that Lewis COULD have been hit with as much as 30 years worth of jail time.

[…] Lewis, a Republican from Harnett County, served in the N.C. General Assembly from 2003 to 2020. He was one of the state’s top-ranking lawmakers until his guilty plea and resignation, which both happened on the same day a year ago.

Prosecutors wrote in one court filing that Lewis “violated the trust of his donors, voters and constituents when he used his campaign funds for personal and business expenses” — but that they gave him credit for eventually admitting it and taking responsibility.[…]

Admitting wrong-doing and taking responsibility for it?  Anybody else out there avoid big jail time doing that?

[…] The News & Observer reported in May that the federal prosecutors who took him down had agreed not to seek any prison time against him, in exchange for his guilty plea and repayment of the $365,000 he took. And on Tuesday, as first reported by WRAL-TV, a federal judge agreed to that deal and sentenced Lewis to no prison time.

Lewis’ charges and plea deal were handled by the U.S. attorney’s office in North Carolina’s Western District. On Tuesday a spokeswoman for the office, Lia Bantavani, confirmed that Lewis was ordered to pay a $1,000 fine and will have two years of supervised release. […]