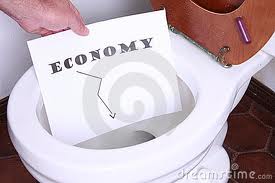 Walden told the Joint Economic Development committee that while he believes a recovery is underway, it ‘s “very slow and very modest.” Several key indicators have made a turn for the better, but they’re still near bottom and not moving much.

Credit growth, for example, was equal to about 37% of GDP in 2005, but fell into negative territory in 2008 as consumers struggled to pay off debts. The number is now back in positive territory at 6%, but is growing very slowly.

Lending, he says, is suffering because of low demand, tougher credit requirements, and a federal reserve policy that pays banks one quarter-percent interest to sit on their excess reserves – a policy intended to set a floor for interest rates, he said, but one that serves as a disincentive to loan the money out.

Housing is lagging, too. Asked whether that market had hit bottom yet, Walden responded, “A year ago, I would have said yes.” Now, he says most economists believe the market went through a double-dip and probably won’t start to pick up for a year to 18 months.

Consumers aren’t roaring back, either. Consumer spending and household wealth are both recovering far more slowly than after prior recessions in 1991 and 2001. Walden says the economy is trying to adjust to dramatic changes in consumer behavior he says may last a long time.

“Consumers are still down by $8 trillion in terms of their real estate value,” he explained. “That’s a tremendous amount of money to have lost and to continue to see as a loss. Therefore, most consumers are very reluctant to take on any new debt, and certainly they’re still trying to pay down their existing debt.”

Senator Bob Rucho, R-Mecklenburg, asked whether there’s anything state lawmakers can do to speed the recovery in North Carolina.

“I don’t think there’s anything that can be done in the short term to make it turn around,” Walden replied, adding that legislators’ energy would be best directed at long-term growth policies to improve the state’s position when the national economy picks up speed.

Watch Walden’s recap of his committee presentation at right.

“I think it least opens everybody’s eyes to some of the problems that small businesses are having out there, and makes us realize that anything we can do to help is a good thing,” Brown said. “Because it IS going to be a slow recovery, and federal policy kind of trumps state policy on a lot of these issues.”

Brown also thinks over-regulation is making it hard for banks to offer loans. “It was probably needed for a while, But now we’ve got to loosen some of the restrictions on our banks and get them back out there doing business.”

Is THIS what Boss Bev plans to run on in 2012?  Apparently not, judging from what Under The Dome reported today.