Well, the Dems TOLD us it was coming.  And here it is.:

As he crisscrosses North Carolina campaigning for U.S. Senate, Thom Tillis likes to remind voters of his modest upbringing. The Republican candidate and former business executive describes a childhood with parents who struggled to make ends meet, and “when times got really tough, we lived in a trailer park.”

As a newlywed high-school graduate working in a warehouse, he found himself living in a mobile home once more, Tillis recounted recently.

What Tillis fails to mention in the campaign trail rags-to-riches story is that he bought a trailer park in early 2007 — an investment he hoped would increase in value while providing him rental income. But now, as he presses his run for the Senate, the story of that trailer park may cause voters to question whether Tillis used the trappings of his office as a state legislator for personal gain.

That’s because in the months after he bought the trailer park, Tillis introduced state legislation and sought political compromises that likely would have increased the value of his property.

Tillis’ Senate campaign noted that he fully complied with the law during the entire process. A spokesman also stressed that Tillis did not advocate for specific bills and, indeed, helped facilitate a public feedback process that ultimately doomed any chance of a bill passing.

At first glance, this appears to be an effort to change the subject from all of those stories about Hagan family members profiting from the federal stimulus. Let’s hear some more about Speaker Thom’s trailer park:

On March 14, 2007, it changed ownership. Tillis bought the three-acre lot with 10 mobile homes from a Huntersville Board of Adjustments official named Ron Julian, a well-known real estate developer who owned numerous parcels of land on the eastern fringes of town.

For those keeping score at home, that’s about two months after Tillis was sworn in to his first House term.  MORE:

owned the property for six months before selling it to Tillis. He had purchased it on Sept. 5, 2006, for $180,000, intending to fix up some of the more neglected homes. “The houses were garbage,” Julian told HuffPost in an interview. “I fixed ’em up and made it a nice place to live.”

That March, Tillis closed on a $395,000 bid for the trailer park. For Julian, who would be elected Huntersville city commissioner later that year, it was a gain of more than 120 percent in six months.

“I’d never even met Thom Tillis,” Julian said, “and it was actually my wife who told me, ‘I bet you could sell this property for double the price. … I guess Thom Tillis just isn’t a very savvy real estate investor.”

Tillis’ campaign said he purchased the property as a long-term investment with the intention of having his brother Rick manage the homes. He did, in fact, have real estate acumen. His wife Susan Tillis was and is a real estate agent.

But Tillis also had political insight.

Tillis began his first term as Huntersville’s representative in the state legislature on Jan. 1, 2007. Around that time, an economic boom was changing the demographics of Mecklenburg County, which includes Charlotte and Huntersville. The success of Charlotte-based Bank of America was transforming the sleepy college town into thesecond-largest financial capital on the East Coast.

For towns like Huntersville, one way to absorb a rapidly expanding population was by folding county land into the city limits, a process called annexation. In North Carolina, the state legislature could approve a town’s request to annex county land, even if citizens objected. Once those properties became part of a town, homeowners stood to benefit from municipal services like police patrols and garbage collection. It also meant properties just inside the town’s old borders would increase in value, since they would be surrounded by newly annexed, higher-priced real estate.

As it happened, in the spring of 2007, one of the areas considered by the state legislature for annexation was the land abutting the trailer park that newly elected state representative Thom Tillis had just purchased.

The first public record of Tillis’ knowledge was March 2, 2007. That’s when Huntersville Mayor Kim Phillips and City Commissioner Sarah McAuley met with Tillis and another area legislator to come up with “legislation that would annex into the Town of Huntersville the entire sphere of influence that’s not now in the Town limits, both on the east side and the west side” of the town, according to the official minutes of a town board meeting held March 5.

Since his district covered the bulk of the land under consideration, Tillis was given the responsibility to “introduce a bill for us, if we agree to it,” McAuley told attendees at the meeting.

Before Tillis introduced the bill in the legislature, the Huntersville city commissioners unveiled the proposal publicly. At a town board meeting on March 5, they announced a hearing on the plan to annex more than 30 square miles of county land and absorb it into Huntersville.

Were the plan to be approved, it would have drastically redrawn the map of Huntersville real estate, turning land that had previously been on the edge of town into centrally located property. Tillis’ trailer park had been just blocks within the town limits. The land under consideration for annexation was directly to its east. After decades of being on the outskirts of Huntersville, 11826 Ramah Church Road would be firmly in the town’s interior.

And the plot continues to thicken:

On March 28, things grew complicated for the annexation plan. That day, Tillis unveiled House Bill 1133, the Huntersville Annexation Bill, in the state legislature. It was referred to a legislative committee.

What Tillis filed wasn’t the original annexation plan discussed with Huntersville officials. It was a new plan, which called for annexing land only on the eastern side of town. Tillis told the Charlotte Observer that he no longer believed the western area outside Huntersville’s boundary should be included. He didn’t cite a reason for the change, saying only that “the eastern and western land should be separate issues.”

Tillis’ trailer park was located on the eastern side of town.

The annexation bill, however, had already morphed into a full-fledged political headache. Voters were angry at what they viewed as a government land grab.

In response, Tillis posted a long and carefully worded notice on his website, reassuring people that just because he had introduced the bill, “does not suggest that the measure will move forward.” 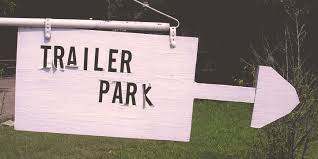 On the contrary, he said, “as a condition for filing the bill, I have asked the town to complete due diligence, including public notice through the print media, a mailing to every affected household, and a public hearing on April 12th. My goal is to provide citizens with every opportunity to have their questions answered and to have their concerns heard.”

In early April, the debate over annexation grew more heated. During a public forum that Tillis attended, residents railed against the plan.

Tillis tried to appeal to the angry residents. “Generally speaking, when you hear about annexation, it doesn’t sound like a good thing,” Tillis said. “And we are going to take that into account [and] figure out if this is the appropriate thing to do at this time.”

Public opinion, however, was hardening. When an attendee called for a show of hands on the annexation, not a single hand went up in favor.

That Tillis was asked to introduce the bill and that he opened it up for larger debate, his campaign said, is evidence that he was a shepherd of the annexation process and not an advocate for it.

“Thom Tillis did his job as a state representative by introducing the bill at the request of the city of Huntersville, he followed state statutes, and the record clearly shows he helped open the process up for community input, which eventually led to the annexation process being halted,” Keylin said.

The official minutes from that contentious meeting, however, show that as much as Tillis was absorbing concern over the proposal, he attempted to assuage it, going so far as to recount a successful annexation effort in a neighboring town, where he served on the town board.

It was for naught. A little more than a week later, the annexation plan was effectively shelved. On April 23, Tillis announced that “House Bill 1133 (Huntersville Annexation) will be deferred … based on the feedback received at the public hearing.” In its place, the town would assemble an advisory board — political doublespeak for doing nothing.

A TURN AGAINST ANNEXATION

Eventually, larger economic trends overwhelmed discussion of annexation. The collapse of the housing market that set in motion the Great Recession tore through Charlotte, decimating the region’s property values.

The poor economy didn’t dissuade Tillis from more real estate speculation. From 2008 to 2010, he and his family-run holding company, TRT Holdings, purchased at least four investment properties in foreclosure and rented them out, much as they did with the trailer park. By June 2009, TRT Holdings had amassed more than $550,000 worth of houses and trailer parks in low-rent areas around Charlotte.

Tillis continued to push legislation that had the potential to affect his real estate interests. On June 13, he went to the House floor to lobby against a small franchise tax on limited-liability corporations that own and rent property. Landlords, he warned, could “be subject to hundreds of dollars of unanticipated expenses.” Tillis’ procedural efforts to stop the hike eventually failed. But in the final budget, the proposed tax increase was excluded.

Four years after he bought it, Tillis rid himself of the trailer park on Ramah Church Road. His brother had moved out of the state and he lacked the time to manage it himself, his campaign said. He sold the property in April 2011 for $250,000 — far less than the $450,000 he had originally sought for the park when he first listed it for sale in 2009, or the $395,000 he paid for it in 2007. The sale brought the property full circle. His wife, Susan Tillis, was the broker for the transaction. The buyer was Ron Julian.