The N&O’s RobRielleWho is the latest drive-by boob to pile on:

[…] The Republicans have tried to nationalize the race to make it a referendum on the president and the Affordable Care Act, which they call Obamacare. The Democrats have tried to localize it and make it about the legislature and education funding. 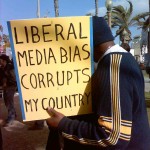 So far, the Democrats seem to be winning the argument.

Conversely, this is the first statewide election where Democrats will have a chance to express their displeasure at what they view as an overreach by the Republican legislature. This may be the Democratic tea party moment.

The Tillis campaign AND the NCGOP have each made the same mistake:  Allowing the BluePrint / Drive-By / Moral Monday / NCDP coalition to frame the debate.   We have to give kudos to state Senator Chad Barefoot — A/K/A the $800,000 man — for actually airing commercials defending the record of the GOP majority on Jones Street.  There needs to be a LOT more before election day.

Polls have shown people hating Congress AND the General Assembly since the dawn of time.  Stupidity, corruption and overreach know no partisan bounds.  Suggesting that this is a new phenomenon now that the GOP is in charge is patently dishonest.

Tillis and the NCGOP have failed to make it clear to voters JUST EXACTLY WHAT the difference is between them and Kay Hagan.  Attendance at committee hearings is not going to do it.

National Review’s Ramesh Ponnuru has a very thoughtful piece comparing THIS year’s GOP campaign strategy with that of 1998. His point?  In 1998, they ran on the message that THEY were NOT Bill Clinton.  No other real agenda was communicated. Republicans were expected to pick up 25 House seats that year.  Instead, they lost FIVE.

I heard a caller from California on Rush’s show the other day.  He said he asked a Republican US House member from California about why the GOP is not putting forth something akin to the 1994 Contract With America.  The congressman’s response?  “Oh, we were in the minority then.  We’re in charge now.”

If things don’t work out all that well for Republicans this year, you can’t honestly pin it on GOP “overreach.”  It can honestly be blamed on that good ol’ American tradition of shooting one’s self in the foot.