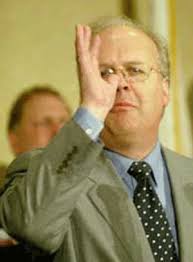 After the May primary, details started trickling out about how important a multi-million dollar advertising buy from American CrossRoads — Karl Rove’s PAC — was in securing Thom Tillis’ victory. Media reports indicated that even his internal campaign polling showed him suffering in terms of name ID, and hanging close with his lesser-known primary opponents.  Then, Rove’s money came in and Theam Tillis took off.

An article in this month’s Politico Magazine sheds more light on the Rove-Tillis relationship:

Wizard of Oz, or wizard for real? Rove has been counted out of the game so many times it would probably be foolish to write him off now. If anything, he’s had a good 2014 so far. Boosted by the shutdown, Rove has been rallying establishment types around the idea that the fault for 2012 lay mainly with the Tea Partiers on the Republican Party ballot. “We’ve given away at least five seats in the last two election cycles, maybe more, because of poor candidates,” Rove complained at an event in Dallas last year, citing a handful of Tea Partiers who won GOP primaries. “The quality of candidates matters.” In a New York House race this cycle, Crossroads spent $800,000 to help elect newcomer Elise Stefanik, a former Bush administration official, by fiercely attacking Matt Doheny, her GOP primary opponent, as unfit for Congress. After Doheny lost on June 24, he frankly laid the blame on Rove. “The reality is my opponent had a good night, and Karl Rove had a good night,” he said.

And Rove has been quick to take credit where he can. Not long ago, he held a secret donor conference call on which the celebrity guest was Thom Tillis, whose decisive win in the North Carolina GOP primary in May earned him the right to take on a vulnerable Democrat, Sen. Kay Hagan, in a key state in November. Tillis, a once-obscure state House speaker, is now one of Rove’s prize horses in the national money derby; Crossroads spent more than $1.6 million on advertising boosting Tillis’ primary campaign and later unveiled a $3.6 million ad campaign attacking Hagan. “Our advertising was terrific,” Rove declared on the call, and Tillis gave credit to Crossroads for his victory, saying in his smooth drawl that the group’s “contribution can’t be overstated.” […]