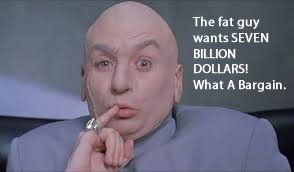 If you are stuck watching local news in the Triangle, you find yourself being bombarded with blow-by-blow details on the actions of William Barber and his coterie of lesbian “preachers” and assorted leftist misfits.  We hear about what ”Moral Monday” is planning.  Their press releases are read verbatim over the air.  We get plenty of video footage of their public temper tantrums.  (Tea Party groups can only DREAM about getting this kind of media coverage.)  But we don’t seem to hear much about how these leftist carnival sideshows are being (1) coordinated by a former ABC 11 reporter, and (2) supported logistically and financially by the owners of WRAL.

On June 20,  The Round Rev put his JOHN HANCOCK on an op-ed in the pages of the last remaining relic of Stalin’s Russia:

A budget is a moral document. Through it, we can measure a state’s values and its vision for the common good. In North Carolina, we toast ourselves as a place “where the weak grow strong and the strong grow great.” But there is no greatness in our current budget proposals.

The draft budgets pushed by Speaker Thom Tillis, Senate Leader Phil Berger and their allies deepen the flood of extremist policies that they unleashed into law last summer. I am no lonely voice crying in the wilderness here. Only 18 percent of North Carolinians approve of the work our state legislators are carrying out this June.

This short session, the Forward Together Moral Movement called upon our legislators to repeal huge tax cuts for the wealthy that hurt the most vulnerable among us. Those harmed by these policies – the sick without Medicaid, working families without the Earned Income Tax Credit – spoke for themselves. But the extremists look away. They veil their immoral choices behind the rhetoric of economic necessity. There simply isn’t enough to go around, they say.

But the General Assembly created this year’s so-called budget crisis by passing hefty tax breaks for the wealthiest and the corporations last year. If our lawmakers found the courage to repeal the unfair tax policies, we would gain up to $1.2 billion in additional revenue. […]

The choices that extremist budget proposals put before us – to pay for teacher raises by firing teaching assistants or preying on poor people for lottery sales – are false. We need not rob Peter to pay Paul.

There is another way forward.

Berger tried to deflect a serious discussion by claiming it would cost the state $7 billion to implement the Forward Together Movement’s Moral Agenda. But when the nonpartisan N.C. Budget & Tax Center ran the numbers on a budget that repealed the tax cuts and aligned with the movement’s platform, it discovered that North Carolina would have an extra $100 million in its coffers in 2014.

With these revenues, we could give teachers an average raise of 5 percent with no strings attached. And extending Medicaid would further increase revenue by stimulating the economy. […]

For the most part, Jones Street Republicans have responded to Barber’s mob by giving them JUST WHAT they want: video of “preachers” and little old ladies getting led away in handcuffs.

Senate president pro tem Phil Berger has taken a different route.  He actually sat down on camera with a handful of Barber’s followers and debated them. He’s also responded to Barber’s published demands:

[…]  For the last year, Barber has led a vocal group of protesters in expressing displeasure with our policy decisions with about a thousand people getting arrested. While I strongly support their First Amendment rights, I am concerned that over-the-top rhetoric and a stated mission to get arrested by disrupting the work we were elected to do undermine serious and substantive debate.

That’s why I reached out to Barber several months ago to request a specific and comprehensive list of his policy goals. I received in response a 14-point agenda that outlined broad and, in some respects, laudable goals, but lacked details about how the state could practically and realistically implement them. It also included other objectives that are inconsistent with the promises

we made to voters.

Still, we analyzed his agenda and asked the legislature’s nonpartisan central staff to draft a budget amendment to accomplish it. Our staff determined the 14-point agenda would add more than $7 billion to the state budget and would require raising the corporate income tax rate nearly tenfold, from 6 percent to 50 percent.

Earlier this month, I met with a group of protesters who staged a sit-in outside my legislative office and explained that Senate Republicans could not support such a massive tax increase due to the devastating effect it would have on North Carolina jobs. I also explained we could not repeal the tax reforms and reductions we promised to working families and job creators that have already become law.

Rescinding those tax cuts is what Barber demands, based on the analysis of a well-known liberal special interest group. But taking more money, in this case approximately a billion dollars, from the pockets of North Carolinians would not even begin to cover the cost of his agenda.

My colleagues and I respect the passion Barber and his followers have for their agenda, and we believe we share the common goal to make our state a better place. But I am disappointed when Barber chooses to rely on exaggerated and divisive rhetoric. The fact is, the bipartisan Senate budget includes overall spending increases to keep pace with inflation, boosts funding for public schools and provides for the largest teacher pay raise in state history.

Perhaps most telling is that, to date, no member of either party has offered legislation to accomplish Barber’s agenda.