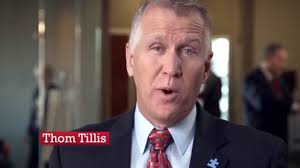 I had a rather enlightening phone call with a friend who pulls down a hefty paycheck for his behind-the-scenes work in federal-level election campaigns.  (To my knowledge, he is not involved in any of North Carolina’s campaigns this year.)

He — like so much of the rest of the political world — is keeping a close eye on North Carolina’s US Senate race.  My friend read my comments about Thom Tillis’ new ad buy and wanted to throw in his two cents.

He points out that news reports indicate the Tillis campaign is “scheduling” $1 million worth of advertising time — NOT buying it.  My friend did a little research and found that the Tillis campaign has only committed roughly $103,000 to the new “Paperboy” biographical ad.

As of the end of 2013, the Tillis campaign had reported a fundraising total of $1,335,080.  Why would they go ahead and blow nearly all of their war chest NOW?  (In fact, they could not do it legally.  A good chunk of that total is — by law — barred from being used in the primary.)

My friend — who has experience in opposing Tillis strategist Paul Shumaker in campaigns — suggests that the Tillis campaign may have tipped their hand on their primary strategy with this $1 million mention:

“That tells me they have no serious intention of getting out on the rubber chicken circuit and pressing the flesh.  It tells me they intend to bombard the airwaves with ads the last month of the race and try to cruise to victory by the power of television.”

To me, that sounds very plausible.  In fact, I’ve seen it done before in a prior Shumaker-orchestrated campaign. In 2004, I was part of a rag-tag group of unpaid activists trying to unseat “co-speaker” Richard Morgan, who was in the midst of his reign of terror with co-conspirator Jim Black.  We recruited a political novice and very nice lady named Peggy Crutchfield to take on Morgan in the GOP primary.

Morgan refused to participate in any candidate forums or other public events.  He shook down enough people with interests before the state House to cobble together a high-six, low-seven figure war chest.  (Sound familiar?) We put together a treasury in the high five-figures.  There was one heck of a mountain to climb. But we thought Morgan’s arrogance, and public anger over his deal with Black, would work in our favor and compensate for the financial disparity.

Late in the campaign, you could not turn on your TV or radio without hearing or seeing — withing two minutes — a Richard Morgan campaign ad.  Morgan was able to paint himself in the most favorable light possible — unfiltered, directly to the voters.  We slugged it out to the very end.  Morgan ended up spending about $700,000.  We spent about $70,000.  Morgan won by roughly 200 votes.

Morgan earned two more years in Raleigh, but that race showed his enemies in the capital city that he could be taken down by a better-financed, better-organized, better-staffed opposing campaign.  He went down in the 2006 primary.

4 thoughts on “#NCSEN: Scheduling an ad buy vs. PAYING for it”