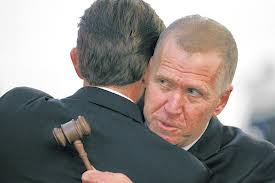 Those of you who were hoping for a more aggressive strategy out of the Tillis campaign are likely going to be disappointed:

[…] So there you have it. Thom Tillis is trailing by a handful of points against an incumbent stuck in the mid-40s, and she’s hanging on because of her margin among women. So North Carolina television watchers can continue to hear more about Tillis’s paper route, and his first election as president of the PTA, and more visuals of him at the diner and in the school library.

One other thought — as mentioned in last week’s article, North Carolina is one of the most expensive states to run in this cycle (at least one of the most expensive with a competitive Senate race). Yes, the DSCC committed $9 million to helping save Kay Hagan. But if they find themselves needing to triage . . . all that money going to help her might go a lot farther in Arkansas, or Alaska, or Louisiana, or some other cheaper state.

Polling has showed a significant disconnect between the GOP, the Tillis campaign, and conservative Christians – a usually dependable GOP voting bloc.  THAT is not a crowd fond of socialism.

There IS NO defense of the GOP legislative agenda.  Where is the NCGOP on this?  There is NOT much attack on ObamaCare, the stimulus, or many other Obama policies that Hagan has gleefully inflicted upon the rest of us.

We’re six weeks in front of the election, and Tillis is still trying to sell himself as a person? I’ll wager that Kay Hagan is probably a nice person.  But she has — and will continue –to vote wrong. Hammer THAT FACT into the voters’ heads.

Tillis has hit harder against fellow Republicans he perceives as enemies, as well as other perceived foes on Jones Street, than he has against Hagan.

Our site has been chock full of ammo to fire at Senator Sock Puppet.  But the Republican campaign apparently intends to keep going with the soft-sell.  Politics is like retail sales.  You HAVE to give the consumer a reason to switch from what they know to try something new.  McCain and Romney failed at that task. Theam Tillis is TRYING to follow their lead.

Kay didn’t soft-sell herself in whipping Elizabeth Dole.  She took it to ol’ Liddy.  Sent her packing back to her suite at The Watergate.  Kay and her pals are telling some outrageous lies in their TV and radio ads.  Instead of telling the truth on Kay, and defending their record, the Republican campaign wants to talk about paper routes.

31 thoughts on “#ncsen: Politics is a contact sport. Why the kid gloves?”