There is a pretty interesting video floating around cyberspace.  It highlights Nathan West, one of the questioners at the Time Warner Cable US Senate debate, and his gun control question.  West participated in the from-the-audience portion of the debate, and portrayed himself as a wide-eyed innocent political novice.  Actually, West (pictured at left wearing Thom Tillis and Patrick McHenry campaign lapel stickers) is a prominent supporter of, and an insider with, The Thom Tillis For Senate campaign.     It would be mighty interesting to learn how the debate sponsor, a big donor to the Tillis campaign, allowed a Tillis operative to participate in the public Q & A section of the debate — posing as wide-eyed innocent Joe Voter.

West asked if the candidates favored allowing convicted felons or mentally-ill people access to guns.  It’s a loaded question — a softball meant to provide Tillis an opportunity to tout his endorsement by the NRA. (For the record, no one said they favored giving guns to the mentally-ill or felonious.)

Greg Brannon said the federal government has no business placing restrictions on firearms.  In fact, he quoted the language of The Second Amendment which specifically forbids the federal government from doing so.  He said specific detailed decisions on firearm possession and usage should be made at the state and local levels. Tillis leapt at that opportunity, describing Brannon’s support of separation of powers as “irresponsible.”   Speaker Thom went on to describe federal regulation aimed at restricting gun ownership by people with mental illness as “practical.” 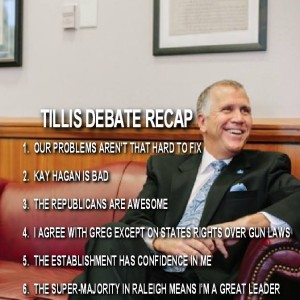 Brannon responded that the federal government would be tiptoeing into dangerous territory making case-by-case rulings on the mental stability of individual gun purchasers.  Brannon, an OB-GYN, says he has prescribed anti-depressants to help women combat and cope with post-partum depression.  Should a six-week episode in a woman’s life prevent her from ever being able to defend herself, Brannon asked.

Evoking the subject — and Tillis responding the way he did — created an opening for NRA rivals (and Brannon endorsers) NAGR and GOA to blast him and for primary voters to start questioning the speaker’s conservatism and commitment to the Second Amendment.

15 thoughts on “#NCSEN: Did planted debate questioner backfire on Tillis?”