It may sound like John McCain and Lindsey Graham, but the words are coming out of Speaker Thom Tillis’s mouth:

[…] Tillis said that jobs and the economy are high on the list of importance to people across the state and will be a priority for him as a member of the Senate. Also, rural areas of the state need to receive more attention in regards to receiving their fair share of financial and other resources, Tillis, a resident of Mecklenburg County said.[…]

Tillis said that priority issues that must be addressed now by the Congress include restructuring Obamacare and improving the country’s safety and security. He said that this is going to have to be done through “tough decisions” made by both the Republicans and Democrats in Congress.

Tillis told his audience in Lumberton that he wanted to operate in DC with the spirit of Ronald Reagan:

[…] “Although people say we (House GOP) didn’t work in a bipartisan manner, we did,” Tillis said. “When I became a member of the House, bipartisanship wasn’t the focus. But when I began my second term as Speaker it was by acclamation. No Democrat ran against me.”

Tillis said that bipartisan government in Washington is possible, pointing back to the relationship that Ronald Reagan had with Democrats in the 1980s at a time when problems in America were similar to what they are today.

“Democrats and Republicans finally got together and said enough is enough,” he said. “They said it was time to get America back on track.” […] 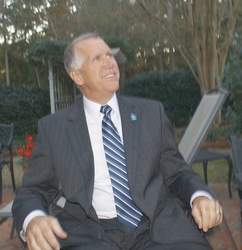 I seem to remember an episode — late in the last session — where Tillis tried to end-run his GOP colleagues by cutting a deal on some pork barrel legislation with the Democrats.  Of course, they screwed him over.

One big distinction — Reagan came to DC after running a rock-solid conservative campaign and defeating an incumbent Democrat by a landslide.  He laid out a specific tax cut agenda and folks in DC fell all over themselves to join the effort.  Reagan didn’t run from conservatism and talk out of both sides of his mouth.

Leadership is about presenting your ideas and persuading others to see things the way you do — like Reagan did.  It’s not about being wheeling-and-dealing for the sake of “getting something done.”  For Reagan, it was about more than government-funded bike trails and paying back donors with “favors” and other people’s money.  It was about fundamentally changing America for the better.