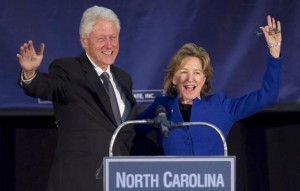 t makes, um, *sense.*  Base your campaign on all kinds of feminist doctrine.  Then, you bring in the guy who caused The White House’s official presidential workspace to be nicknamed “The fellati-Oval Office.”

Yep.  Our fair capital city was, um, *graced* with an appearance by The King of The Man-whores™ himself — William Jefferson Blythe Clinton. Slick Willie told us — while getting rather handsy with senator Kay Hagan — that it is STILL ”all about the economy.”  Really?  Then why has the Hagan campaign been one big gynecology symposium?  (I guess it would have been extremely awkward for Team Hagan to have this big ol’ lying sex offender talking about birth control at their rally.)

Let’s hear from the lefty steno pool at The N&O:

Clinton’s visit brought some Democratic star power to the final days of the hotly contested U.S. Senate race, and the crowd’s cheers occasionally drowned him out.

Clinton said Tuesday’s election is a choice between the “trickle-down” economics advocated by Republican Thom Tillis and Hagan’s record of supporting bipartisan efforts to create jobs. Citing statistics, he contrasted the economic growth during his presidency to the growth under Republican President Ronald Reagan.

Really?  Has Thom Tillis been advocating for supply-side economics? I’ve mostly been hearing about Hagan missing certain committee meetings and the fact she is on Obama’s side.

Tillis spent a lot of time in the legislature trying to tamp down and water down tax cut proposals.  He was a big fan of alternative energy mandates and handing taxpayer subsidies to private businesses.  He’s also been sounding quite keen on the idea of ObamaCare.  Not exactly a fire-breathing fanatic for Austrian economics.

This is a taste of things to come. If things don’t go well for Tillis on Tuesday, expect to hear about the need to restrain “extreme” conservatism in the NCGOP and the NCGA.  The Tillis campaign has done a lousy job of pitching and / or defending the GOP’s limited government platform.

The speaker MAY — in spite of all of the polls — slip by due to voter anger at Obama and his party.  But this is not a referendum on conservatism.  How could it be?  Neither of the major parties has been pushing it.

We actually agree with Clinton that it SHOULD BE all about the economy.  The tax and regulation decisions being passed down from Washington are killing the economy.  Hagan has been a passionate supporter of the stuff that has been hindering an economic recovery.  She’s voted FOR the stuff that has put businesses out of commission and people out of work and onto the street.

Clinton was lucky for being in the right place at the right time. (The first president Bush helped him out, too, by going along with Democrat tax increases.)  He rode the wave resulting from decisions made during the Reagan years.  He also spent most of his 8 years fighting with a GOP controlled Congress.  Very little got done in DC.  (And that is usually a key ingredient to economic growth and prosperity.)

His portrayal of the Reagan years — much like most of what comes out of his big fat mouth — was dishonest.  Reagan came in during one of the worst economic disaster our country has seen.  It was the end-product of unbridled statism.  We saw record growth throughout the 80s (with the exception of a 1982 recession produced by aftershocks from the Carter years, and a 1986 recession brought on primarily by Democrat duplicity on taxes and spending cuts).

One thought on “#ncsen: A dirty old man comes to town”