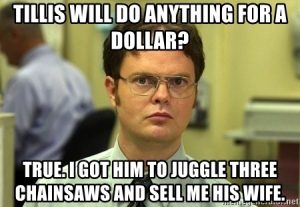 next Republican president in the back every chance he got?  (Yeah, us neither.)

I’m curious.  Can Robert Mueller expand his collusion investigation to include Thom Tilli$$$ and his relationship with Elizabeth “Fauxcahontas” Warren (D-MA)?

At the year’s end, Tilli$$$’s office released their boss’s “Top 20” examples of working “across the aisle” to, um, “get things done.”  (Make sure you read the linked document on an empty stomach.)

The “Top 20” includes a whole lot of working with Elizabeth Warren — the left’s dream candidate against President Trump in 2020.  Curiously, the list counts Tilli$$$ working with Richard Burr as an example of “bipartisanship.”

Just a few days ago, Tilli$$$ published an op-ed in a DC political insiders’ publication putting amnesty for illegal aliens out there as the key to ending the stalemate over government spending and the resulting shutdown. Thank goodness the efforts of ol’ Thom and his buddy Lindsey Graham-nesty failed. 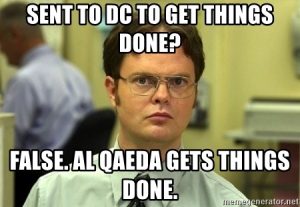 This guy is sooooo motivated by the wants and needs of The Farm Bureau, The Chambers ( US and NC) and The Koch Brothers.   The good of the country and the desires of his constituents are soooooooo far off his radar screen.

Recent polling shows about a third of the state’s voters either don’t know Tilli$$$ or have no opinion.  Some would view that as abysmal for someone who served in the legislature eight years and has been in DC for five.  But it actually presents a great opportunity for Paul Shumaker and the gang to target that low-information third of voters with  a lot of ads: (1) funded by all kinds of lobbyist cash and (2) painting ThomT as the second coming of Ted Cruz and Rand Paul.