OnMessage Inc. is a high-powered, successful DC-based political consulting firm.  It has clients from sea-to-shining sea.  In North Carolina,

What jumps out at you is that OnMessage was a paid contractor to Jones primary opponent Taylor Griffin in 2014.   Griffin has announced his intention to come after Jones again, but has yet to file any financials with the FEC.  But by the looks of OnMessage partners Brad Todd and Guy Harrison’s tweets, the firm is firmly back in the Griffin camp for 2016: 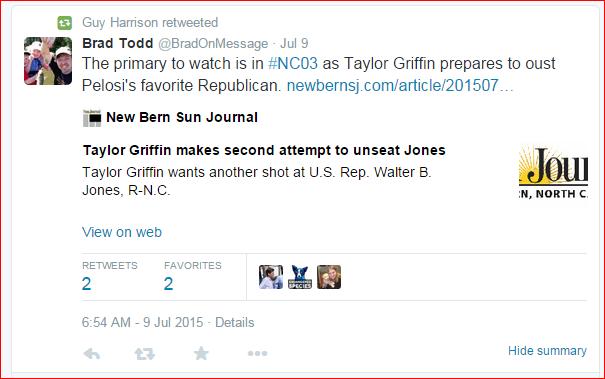 Interesting. The NRCC proudly states that one of its missions is to protect Republican House incumbents.  (Walter Jones fits that definition.)  I wonder what those folks think about one of their paid consulting firms trying to threaten the job security — two election cycles in a row — of a House Republican incumbent?

As an incumbent, Jones pays “dues” to the NRCC.  One has to wonder if money he has raised and paid as “dues” is being recycled to these guys working against him.

OnMessage has also been a paid contractor for our junior senator Thom Tillis, as well as congressmen David Rouzer and Richard Hudson.  I wonder what those folks think about their consultants working to oust one of their Republican colleagues?