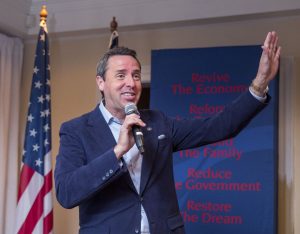 I had high hopes for this guy.  He had quite a bit of outsider street cred when he first ran.  But, sadly – like so many others who go to DC — he has fallen in love with the place:

[…] On Wednesday’s broadcast of CNN’s “New Day,” Republican Study Committee Chair Representative Mark Walker (R-NC) stated that “the Steve Bannons of the world, those — that kind of language and rhetoric, that’s not who we are.” And that Republicans have to be willing to call out inappropriate rhetoric. […]

OK, what “inappropriate rhetoric” is he talking about?  Securing our borders? Building a wall? Getting tough with China on trade?  Bannon was a huge reason Trump made it to 1600 Penn.  He’s been the most effective national voice for conservatism (AND Trump’s agenda) we’ve had in decades. Bannon isn’t saying anything different from  Trump. By going on CNN — of all things — and making statements like that, it sounds like Mr. Walker is (1) buying into the spin that Trumpism = bigotry and (2) hanging up his shingle on the NeverTrump side of town.

[…] Walker said, “I don’t think the bulk of Republicans are represented by Senator Jeff Flake. However, as a former pastor, I don’t shy away from…believing that tone matters. I have the great privilege of representing the largest historical black college university in the country, North Carolina A&T, who just won their national championship, I might add. That’s important to me. In fact, in two weeks, Cedric Richmond, the Chairman of the Congressional Black Caucus and I are partnering together to write an op-ed on criminal justice reform, and hopefully [legislation] that comes behind that. We have to be consistent. Our tone in impacting different the cultures and communities has to be one of heartfelt, not one of judgment. And I believe that’s where Republicans have to continue to move forward.” […]

*Good luck with those GOTV efforts on the A&T campus.*

Walker sounds like he’s calling for Republicans to bring knives to a Democrat GUNFIGHT.

An op-ed?  Walker will end up slapping his name on something that sounds a lot like one of those Black Caucus one-minute speeches you see late at night on C-Span.  And after it is published, Richmond WILL go right back to railing against Walker and the other ‘white devils’  in  the House majority.

(Pelosi & co. looooooove stuff like this.   This brings a new meaning to the term ‘Nancy Boy.’   What was it Lenin said about “useful idiots”?)

The GOP had great success in 2016 running on what Trump and Bannon talk about.  Why should we be moving toward the platform of the LOSERS?

[…] When asked how, as a Southern Baptist minister, he reconciles his faith with President Trump, Walker responded that social conservatives had “legitimate” grievances with President Obama. 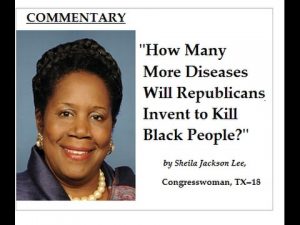 He continued, “Now, that doesn’t give anybody a pass, whether it’s President Trump, or anyone else. But that is something that I hope that we’ll continue to see growth there, when it comes to dealing with people, not just in our base. You know, I probably shouldn’t say this on CNN, or even out loud, but I will tell you this, the Steve Bannons of the world, those — that kind of language and rhetoric, that’s not who we are. But Republicans have to be willing to call out when there’s certain language used that’s — with undertones to our friends and neighbors of all the communities that we serve. We have to have the boldness to be willing say, ‘You know what, that’s not right. That’s not the way that we would share what it is that we believe.’ And I think ultimately, when you do that, when you have the right heart, I think people appreciate that.”

So, listen up folks. *Be nicer to Sheila Jackson Lee and The Round Rev. * (Pastor Mark says so.)