That’s what at least one conservative stalwart in the US House is alleging:

Rep. Richard Hudson (R-NC) usually manages to walk the line between endearing himself to the Establishment and ostensibly holding true to the conservative rhetoric he proffers on the campaign trail. ‘Usually’ being the key word.

Now it seems that Hudson is playing an important role in providing cover for a gun control bill sponsored by ultra-liberal senators Diane Feinstein (D-CA) and Chuck Schumer (D-NY).

At the beginning of this year Hudson introduced House Bill 38, the National Concealed Carry Reciprocity Act, that would have concealed carry certifications from states like North Carolina be honored in, say, Virginia. A great idea that should have been recognized a long time ago as consistent with liberty.

Conservatives and Second Amendment advocates should make some noise to have this bill passed, right? Not so fast.

According to the Chairman of the Second Amendment Caucus Rep. Thomas Massie (R-KY) Hudson’s bill is now serving as a Trojan Horse the Feinstein/Schumer/Tillis gun control push. 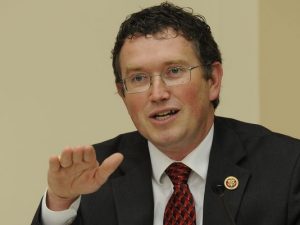 “As Chairman of the Second Amendment Caucus, I’m blowing the whistle on the swamp. Last week, Republicans in the House fast tracked through committee HR 4477, a gun bill titled “fix-NICS.” The Senate version of this bill is cosponsored by Senator Dianne Feintstein and Senator Chuck Schumer and it will send $625 million over 5 years to states to expand the national background check database. The bill will also advance former President Obama’s agenda of pressuring every branch of the administration (such as the Veteran’s Administration) to submit thousands of more names to the NICS background check database to deny gun purchases. The House bill is identical in every way to the Senate bill except the House bill will also commission a study on bump-stocks.

What you don’t know, and what virtually no one in Washington wants you to know, is that House leadership plans to merge the fix-NICS bill with popular Concealed Carry Reciprocity legislation, HR 38, and pass both of them with a single vote. Folks, this is how the swamp works. House leadership expects constituents to call their representatives demanding a vote on the reciprocity bill, when in fact the only vote will be on the two combined bills.”

*What?  Shenanigans? From elected officials? Well, I never …*

This is the classic bait and switch move that Swamp-dwellers use to pull one over on the American people, and Hudson is apparently willing to provide the bait in the form of his national reciprocity bill. They are hoping you won’t notice as they infringe on your Second Amendment rights and then turn around to gloat about protecting them. What a joke.

What are some clues that you should be concerned with the fix-NICS bill? Well according to Massie there are many.

“(1) The first sentence after the title of the bill reads “Section 103 of the Brady Handgun Violence Prevention Act (34 U.S.C. 40901) is amended…”
(2) Senators Dianne Feinstein and Chuck Schumer are cosponsors in the Senate.
(3) It’s being rammed through, without a hearing, in a very nontransparent process, and it will be passed by attaching it to the popular concealed carry reciprocity bill which already has enough votes to pass on its own.
(4) It spends over half a billion dollars to collect more names to include in a list of people who will never be allowed to own a firearm.
(5) It compels administrative agencies, not just courts, to adjudicate your second amendment rights. 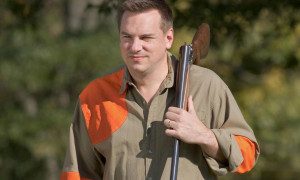 Does the NICS background check system have problems? Yes, it results in tens of thousands of unjustified denials of gun purchases every year. But like many bills in Congress, the fix-NICS doesn’t live up to its name – it will likely do the opposite.” [..]

Thom Tilli$$$ is co-sponsoring the Feinstein bill in the Senate. *Just thought you’d like to know.*

[…] The bill encourages administrative agencies, not the courts, to submit more names to a national database that will determine whether you can or can’t obtain a firearm.

When President Obama couldn’t get Congress to pass gun control, he implemented a strategy of compelling, through administrative rules, the Veterans Administration and the Social Security Administration to submit lists of veterans and seniors, many of whom never had a day in court, to be included in the NICS database of people prohibited from owning a firearm. 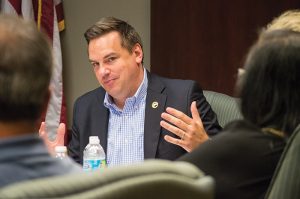 Only a state court, a federal (article III) court, or a military court, should ever be able to suspend your rights for any significant period of time.

So if Hudson is really the Gun Rights advocate that he presents himself as, he should do everything in his power to undo the hijacking of the concealed carry reciprocity bill by the Establishment gun snatchers that want to cloak a wolf in sheep’s clothing to attack your Second Amendment rights.[…]