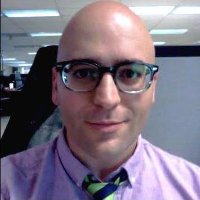 Those of you in The Triad may know Joe Killian.  He’s covered politics for aeons with The Greensboro News & Record.   His “reporting” during the 2014 US Senate race looked and sounded a lot like an audition to be Kay Hagan’s mouthpiece — if she survived ‘Hurricane Thom’.

Well, it looks like Scowlin’ Rob and Blinkin’ Chris have pulled Killian into their fold.   You’ve got to give the guy credit.  He’s not like Binky and Miss Leslie  — out there still trying to pretend to be unbiased and without an agenda.  His alliance with Chris and Rob is still so new that he hasn’t had time to update his LinkedIn profile.

Joe seems to be fitting in well at his new home.  His writing style is almost as Marxist and mean as PolicyWatch’s two den-daddies.  Get a load of what Joe finds to be “extremist”:

Yesterday we published a story about the state’s reliance on the vice president of the American College of Pediatricians for expert testimony in the lawsuit over HB2.

The group’s name certainly makes them sound like an above-board and by-the-book group of physicians concerned with sound science.

But scratch the surface and you find the group is actually a relatively small conservative advocacy group well outside the mainstream of modern medicine whose dedication to science takes a backseat to their anti-LGBT political agenda.

Take it from the group itself.

Can any pediatrician join the American College of Pediatricians? Not quite.

“Membership is open to qualifying healthcare professionals who share the College’s Mission, Vision and Values.”

“The Mission of the American College of Pediatricians is to enable all children to reach their optimal physical and emotional health and well-being. To this end, we recognize the basic father-mother family unit, within the context of marriage, to be the optimal setting for childhood development, but pledge our support to all children, regardless of their circumstances.”

Huh. So, what about children from families with gay and lesbian parents?

“[…W]e recognize the basic father-mother family unit, within the context of marriage, to be the optimal setting for childhood development.” THAT is EXTREME ????
Of course, ol’ Joe ignored the part after the word “but”. *You know, the whole part about pledging support to all children, regardless of their circumstances.*

Oh, brace yourself.  Killian has MORE examples of “extremism”:

“The American College of Pediatricians:

Remember, folks.  This crap is underwritten by the same folks who finance the crap you get served up on WRAL every day.  And this guy Killian?  He didn’t magically transform into a leftist weenie LAST MONTH.  He had to fake it with the N&R.  Now, he’s in weenie heaven — with Chris and Rob.

It’s sad that there is actually debate about having kids raised by a mom AND dad as the optimal scenario in child development. It’s also sad that you can be rebuked for daring to suggest that modern political thought be weeded out of science.

Groups like this form because “mainstream” medical and scientific organizations stifle, censor and run off any of its members who dare to back off the Marxist line.  The same thing happens in the media.  “Mainstream” drive by organizations stifle and run-off anything or anyone that dares not champion the statist gospel.  So, alternative media — like this site — rise to the challenge.

Good for Joe.  I’m glad he’s come out and exposed his true self.  Just remember there are a lot more like him embedded in the ranks of your local driveby media outlets.