State Rep. Frank Iler (R-Brunswick), who took a walk on the vote to repeal HB2, tried to explain himself to his constituents in an April 4 newsletter:

The well-known repeal of House Bill 2 had a previous version that contained a religious freedom protection clause that I called the “cake baker” clause that protected small businesses from being sued if a customer’s request for service violated their religious convictions.  It was not in this bill. […]

*Oops.*  That’s different from what that very specific pack of liars, spinning their YES votes, has been telling us.  MORE:

[…] Additionally, statements I made in a confidential caucus meeting were leaked back into our district, a flagrant violation of confidentiality from my trusted colleagues. […]

After a procedural vote to delay the vote on the bill failed 34 – 85 it was obvious the bill was going to pass overwhelmingly. I voted “yes” on this, which was like voting “no” on the bill. 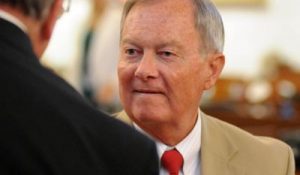 Voting YES is like voting NO?  Is that kind of like John F’ing Kerry being FOR the war before he was AGAINST it?

[…] After pressure from both sides and the breach of confidentiality, my frustration boiled over, and I protested by leaving the chamber and refusing to vote on the bill.I have been criticized for that, but sometimes one has to stand up and send a message even if you stand alone.  As predicted, it passed 70 – 48, and my vote would have made no difference.  It was a most frustrating time.[…]

So, he wants a medal for running from the fight?  His constituents were not represented in this vote.  You get elected to the General Assembly AND Congress to speak for your constituents and VOTE when it is time to VOTE.