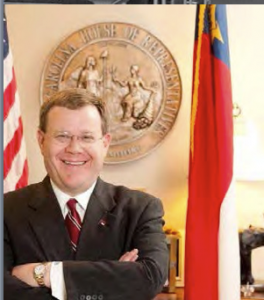 Next weekend, state House Republicans will be huddling to ID their picks for House and caucus leadership positions for the upcoming legislative session.  With the departure of Thom Tillis for DC, all eyes are on the race for speaker. A crowd of legislators has big dreams about being the next speaker.  But insiders tell me the race for speaker really boils down to two candidates:  Leo Daughtry of Johnston County and Tim Moore of Cleveland County.

Daughtry – a former Republican caucus leader with decades of experience in the General Assembly — offers a clear contrast to that of the much younger Moore — an attorney and current Rules Committee chairman with a dozen years of experience in the House.  Daughtry is comfortable as a wheeler-dealer who doesn’t mind crossing the aisle to work deals with Democrats.  Daughtry has been very generous with campaign cash for his colleagues during recent election cycles.  Moore has been, too — but also got out in the field and provided some sweat equity toward his colleagues’ campaigns.

Moore has put together a glossy, full-color brochure making his case to his Republican colleagues for being elected speaker of the House.  The document has been distributed throughout the caucus, and we — of course — got our hands on a copy.  Its centerpiece is a Dear Colleagues letter:

I want to share with you my vision of where we can take not just the north Carolina House Republican caucus – but North Carolina as a state.

For many years our role was to explain to the citizens of North Carolina how the wrong-headed and corrosive decisions of Big Government liberals were eroding the livelihoods and hope of North Carolinians. North Carolina was placed in real jeopardy by the long unchecked decisions to place government and those who “knew best” in charge of our progress and prosperity. For too long the legislative majority ignored the basic truth that individuals are best positioned and motivated to build lives and take risks for the benefit of themselves and their families. Our role, in the minority, was to point out the dangers of liberal legislation at every turn, to sound the alarm no matter whether it grew tiresome to those who didn’t want to hear it, and who didn’t recognize the danger of their actions.

Then came 2010. We arrived in the majority of both chambers for the first time in over 100 years and immediately undertook the herculean task of steering the ship away from the rocks. We passed a sound budget and began enacting sensible conservative reforms to restore balance between government and the hard-working citizens of North Carolina. There was no time to waste. We began to put the House back in order.

In 2012 we gained a supermajority in both chambers and a Governor who saw, for all our intra-party differences, our great State in fundamentally the same way.

Even with those accomplishments, it is time we move toward a different phase in our leadership of North Carolina. To govern in the future, I believe we must use and grow our collective wisdom and participation. That means we must use the vast resources of the membership of our caucus to solve problems. We must encourage fruitful debate and respect opposing viewpoints and each other. Regardless of the outcome, we stand as one caucus.

I am announcing my intention to run for Speaker of the North Carolina House of Representatives. I hope you will take some time to review my goals for our caucus and our state. I look forward to speaking with you personally soon.

Hmmm.  A move away from an all-powerful speaker (Brubaker, Tillis, Black, Hackney, et. al.) to a lot more of the key decisions being made by the majority caucus. Interesting.

Moore’s document also includes a detailed outline of his stands on issues and his plans for the House under his speakership.

7 thoughts on “#ncga: Tim Moore makes his case for Speaker”