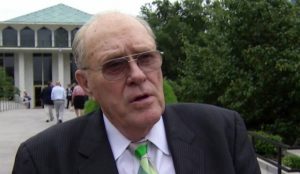 That question definitely does arise when examining state senator Jerry Tillman’s campaign expense report.  According to reports filed with the state board of elections, the senator’s campaign has paid $10,500 during this election cycle to Archdale Friends Meeting in Randolph County.

From January through October, the campaign issued regular monthly $500 checks to the church.

This comes on the heels of reports that Tillman’s campaign has been renting a “campaign office” in Raleigh.  The townhome located on a golf course is 70 miles outside of Tillman’s district.  Tillman had NO primary or general election opponents this cycle.

The townhome community that includes Tillman’s “campaign office” is a development whose rentals are administered by Fred Smith Properties.    Smith is a former Republican state senator.

2 thoughts on “#ncga: Is church tithing a campaign expense?”