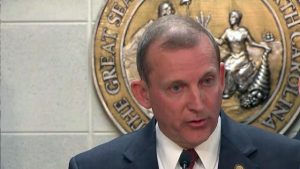 That’s the word on the street (at least the streets in the Third Congressional District).  I’ve heard from a number of movers and shakers in the 3rd district NCGOP who tell me they’ve heard from the North Carolina Senate Majority Leader and folks close to him about this.

If Brown does follow through, it would make the 3rd district GOP primary — already featuring incumbent Walter Jones and Craven County Commissioner (and lobbyist) Scott Dacey — even more of a 2018 blockbuster.

GOP congressional primaries in North Carolina are typically quiet affairs.  Though, in 2018, the 8th’s Robert Pittenger has all he can handle from pastor Mark Harris.  Brown’s entry into the race may lead to changes in TWO Republican-held districts.