Yes, the word has come down from on high:

Dear Caucus Members –
We have reached a tentative agreement! Our staff is still reviewing the provisions, and central staff will need the weekend to review and log all technical changes. I will have a “highlights” document for you as soon as possible.

Below is a press release that will be sent to the media and others momentarily. The Speaker’s Office and Budget Chairs do not plan to brief the press on any further details until Caucus receives the information first.

We expect that the official Conference Report will be ready on Sunday night. Please note that it has to be posted online for it to be read-in on Monday. I will send you the link to the Report then, if it is not possible to get it to you sooner.

We are working on settling up a Caucus briefing and Conference Committee meeting for Monday. Please stay tuned for further information.

O-Kay.  The drive-bys will do their little dance and act like this is all over.  Not even close.  Some other factors need considering: 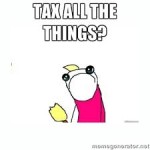 The star so far on the Republican side has been Majority Leader Mike Hager.  Sources tell me he has been bending over backwards to keep the caucus informed about the negotiations amidst some uproar about folks being kept in the dark.  (Miss Mollie appears to address concerns about keeping the caucus informed in her email above.)

This “agreement” still needs to pass the House AND the Senate before all is said and done.  There is a lot of talking and a lot of politicking ahead.