Free marketeers and various and sundry other limited government types have been cheering the introduction of H.3 by state Rep. Chuck McGrady (R-Henderson County) dealing with the question of eminent domain:

Republican Rep. Chuck McGrady’s attempt to restrict the legal process known as eminent domain is the only bill so far in the House. Senate rules prohibit any bill filings until the legislature returns Jan. 28.

McGrady wants a constitutional amendment to ban state and local government from seizing land for use by private developers. He filed similar legislation two years ago, and it passed the House 110-8 before stalling in the Senate. Constitutional amendments require voter approval but must first clear the General Assembly.

“I’d like to see it come up quickly and go over to the Senate,” said McGrady, who represents Henderson County. He said he hopes to smooth any obstacles in that chamber.

Seizing property for economic development isn’t a common practice in North Carolina, but it does happen. In 2001, Raleigh forced John Walter Stone III to sell a historic building near downtown. A judge required him to accept $756,900 for the lot, though he argued it was worth up to $1.5 million. Raleigh leaders are now working to sell the property to a developer for $2 million.

McGrady says he worries the approach could be used to create development sites along new transit lines. “I don’t believe that we ought to allow eminent domain in that situation,” he said.

The bill, House Bill 3, would also add two other provisions to the state constitution. One would require government to pay “just compensation” for land seizures. Property owners could also request that the sale price be set by a jury, rather than a judge.

“We’re maybe the only state that has no reference to just compensation in the state constitution,” McGrady said. […]

The John Locke Foundation in Raleigh says McGrady’s bill has some promise to it, but does express some concerns:

Barry Smith writes at the Carolina Journal that Rep. Chuck McGrady has proposed an amendment to the N.C. State Constitution barring the government from taking private property except where there is a “public use,” which is the traditional standard enshrined in the federal constitution. The amendment would also require “just compensation” (whatever that is), which is also the standard required by the U.S. Constitution for federal takings. 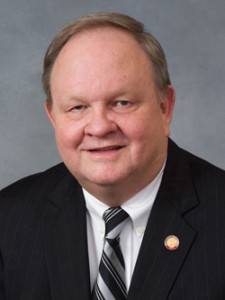 Being relatively new to the Tar Heel State, it is news to me that North Carolina’s constitution doesn’t specifically protect against eminent domain abuse. Article I, Section 19 does protect individuals against deprivation of “life, liberty, or property, but by the law of the land,” but that amounts to a declaration that the state may take our life, liberty, and property as long as it can point to some obscure law it interprets as allowing for it.

Daren Bakst stated in a 2011 report from the John Locke Foundation that “North Carolina has the weakest property rights protection in the country,” and there is no mention in the constitution of eminent domain.

Even with a federal law prohibiting takings except for public use, Kelo v. New London still happened–that was a 2005 case in which the U.S. Supreme Court decided “economic development” by a private company counted as a “public use.” So if North Carolina adopts an amendment, it better be stricter than the Fifth Amendment of the U.S. Constitution. Much stricter, with much more precise wording.

The John Locke Foundation has been fighting the battle for years, and this new amendment would probably not be happening without its efforts. There are some weaknesses inMcGrady’s bill though. First, it allows for utilities like electric and gas companies to seize private property. This is cronyism–allowing private providers of utilities to profit off of stolen goods is not a legitimate government function. Second, there is nothing preventing the same abuse that happened in Kelo. Bakst’s report recommended that an amendment “require the government to have the burden of proof to demonstrate that a taking is for a proper public use.” Even that is too lax–it relies on the government to limit itself–but McGrady’s bill doesn’t address burden of proof.

In short, McGrady’s bill protects us about as much as the Fifth Amendment, which Kelo proved isn’t much of a protection at all. It’s probably better that this bill passes than not, but it doesn’t go as far as Bakst, who didn’t go far enough.

Article I of the N.C. State Constitution, the declaration of rights, holds that the people are sovereign and that “all political power is vested in and derived from the people.” Last I checked, people don’t have the right to take each other’s stuff. Let’s hold the state to its own words.

Let’s say the local government decides your property would be a great place for an industrial park / business park for attracting new business.  You know, that economic development thing.  Couldn’t that be labeled ‘public’?