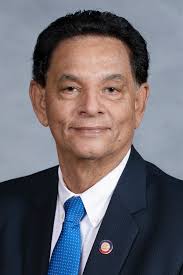 NC House Rep.  Charles Graham (D-Robeson) is throwing his hat. in the ring in an attempt to knock off incumbent congressman Dan Bishop (R).  Here’s what Graham told his hometown folks in Robeson County earlier this week:

“I’m honored to announce my candidacy for The United States House of Representatives in the 2022 election for the 9th Congressional District,” the Democrat from Lumberton said.

The 9th District includes Robeson County and currently is represented by Rep. Dan Bishop, a Republican from Charlotte. Bishop won the seat by defeating Democrat Dan McCready in a September 2019 special election. Bishop was uncontested in the 2020 general election.

Graham said he has been considering running for the District 9 seat for several years.

“I just feel like this is the right time,” he said.

He wants to offer voters a choice in a candidate who understands the needs of rural counties and has worked as a bipartisan representative, said Graham, who is in his sixth term as a state House member.

“After considerable thought, I’ve made the decision not to run for reelection to the North Carolina House of Representatives District 47, Robeson County,” Graham said. “It has certainly been an honor and privilege.”

Graham pointed to his 10 years of service in the House and on numerous standing committees, including being chair of the Federal Relations, Indian Affairs Committee.

“Legislation I’ve sponsored and co-sponsored has had a positive impact on the lives of Robeson County citizens economically, educationally and environmentally,” he said. “Also, I have received recognition by North Carolina Commerce as a ‘Jobs Champion’ and the North Carolina Sheriffs Association as ‘A Friend of Law Enforcement.’”

If elected to the U.S. House, he will take his experiences in the N.C. General Assembly, as a business owner in Robeson, Scotland and Richmond counties and as a retired educator to Congress and use them to work for the best interest of the people in 9th Congressional District to advance prosperity and rebuild the economy, Graham said.

“The knowledge I have of Robeson County, and rural counties in general will be a strength to advocate and legislate for programs, funding and services rural counties need,” Graham said. “I make this announcement not for personal gain, but for duty, service, and commitment to give all citizens a voice and a resource that will be of benefit economically throughout the 9th Congressional District.” […]

Graham regularly ranks as one of the more conservative Democrats in the North Carolina House.  Republican House leaders recently awarded Graham a committee co-chairmanship.  Graham seems to have more luck than most House Democrats in the GOP-controlled House in winning appropriations for his legislative district.

One thought on “NC-09: Bishop draws an opponent”