Let me start off by saying I am a passionate defender of The Second Amendment.  (That ought to be beyond dispute to anyone who has read this site for an extended period.)

I tend to find myself in agreement with the folks at Grass Roots NC (GRNC) more often than not.  (I know that their leadership regularly reads, and sometimes comments, on  our site.)

GRNC issued some recommendations in the two special congressional races today.  I am not arguing necessarily with WHO they selected, but I am raising questions about the rationale they offered in making said selections.

Here’s how they explain their arrival at their candidate recommendations:

GRNC’s “Remember in November” project estimates candidates’ views on “assault weapons,” concealed handguns, gun storage laws, gun rationing, other gun control and the Second Amendment.  THE EVALUATIONS HEREIN ARE NOT ENDORSEMENTS.  We issued surveys first to a control group of gun owners and then to candidates. Next, we measured how closely each candidate’s views and voting record (if available) agree with the control group.  Pay more attention to voting records than survey results unless, of course, you believe politicians never lie.

“PAR/DIS”: Candidate’s party and district. “D”=Democrat, “L”=Libertarian, “R”=Republican. Number is district number. Example: “J Smith,” above is a Republican from the 15th District.

“SURVEY”: The percentages listed depict agreement between a given candidate and our control group (e.g. an “80” under the “Survey” section means 80% of the candidate’s answers agreed with the Conservative Gun Owners).  “NR” means the candidate failed to return the survey.

“VOTE”: Votes are more accurate than surveys and should be given more attention in determining candidate stance. Where available, this column indicates how often candidates’ votes agree with the control group of gun owners (e.g. a “90” under “Voting Record” indicates candidate’s voting record agrees 90% of the time with what was desired by control group).

“OTHER”: Derived from evaluations by other gun groups, bill sponsorship, etc.

“EVAL”: The evaluation is not a rating. It estimates percentage of time candidate is expected to agree with the Conservative Gun Owners.  The maximum **** candidate tends to agree with conservative gun owners at least 90% of the time.

Okay, now HERE are the ratings / evaluations / recommendations for the 3ed district candidates: 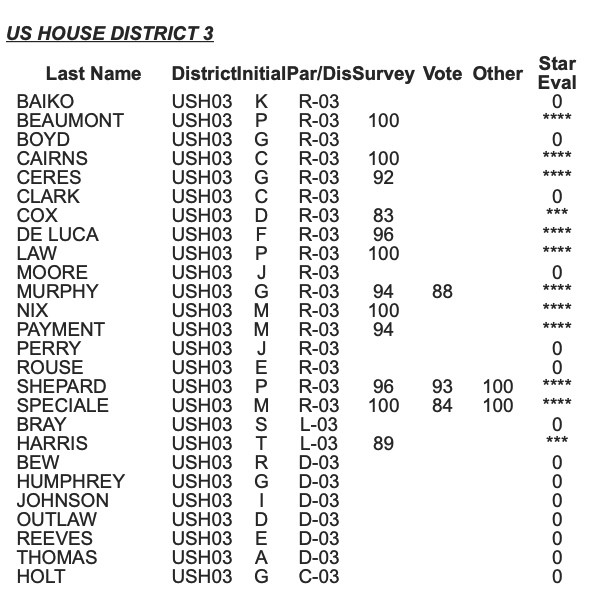 […] 3rd Congressional District: First, we wish to note that there are numerous solid Second Amendment candidates in the race, and it is difficult to pick one. The candidate we DO NOT recommend is NC House Representative Greg Murphy, who has repeatedly voted against the interests of gun owners. In this race, GRNC-PVF has no choice but to stick with a proven pro-gun candidate who has acted as primary sponsor for a number of pro-gun bills. Accordingly,GRNC-PVF recommends MICHAEL SPECIALE for Congress in the 3rd District. […]

Okay, so they “recommend” Michael Speciale and make a point of slamming Greg Murphy.  But let’s go back and look at the group’s criteria for making recommendations.

This is certainly not a shill for Greg Murphy.  If you look at the numbers  — and consider them in terms of the standards laid out by GRNC — Phil Shepard should have come away with the recommendation / endorsement for the 2019 GOP nomination for the Third Congressional District.

I welcome Paul or anyone else with GRNC writing in to help explain / clarify this for me and our readers.  I think that would be vitally important for the credibility and integrity of this year’s and future years’ endorsements / recommendations by Grass Roots North Carolina.

8 thoughts on “NC-03: About that Grass Roots NC endorsement / recommendation ….”