First it was The Club For Growth. Now, Americans For Prosperity is reaching out to smack Big Govt Barbie.™  This has the driveby media just flummoxed.  HOW — HOW can these right-wingers be against the darling of the Trump campaign?  How ???

Nee-nee is eating up the attention her clinging to Donald Trump has gotten her.  She got to write in Time magazine. She got to be one of Trump’s emissaries to Paul Ryan. All over Twitter, Trump fans are clamoring for Ellmers’s reelection.  I wonder if they saw her interview from ONE WEEK before the North Carolina primary, where she announced her support for John Kasich because “he sounds the most mature right now.”

In today’s Wall Street Journal, we get more of our very own Claire Underwood basking in the glow of her ne 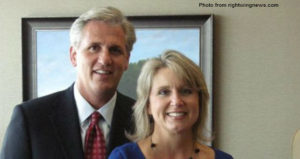 […] For some lawmakers, backing Mr. Trump is a nod to the will of constituents more than a deep-rooted agreement with his policies. Rep.Renee Ellmers (R., N.C.) said her realization came in talking to voters in the week before her state’s March 15 primary. “So many were going to vote for Trump and it just really clicked with me that he’s having a conversation with the American people that we [Republicans] haven’t been,” she said Wednesday.[…]

HOW do you go from Kasich is ”the most mature” to THE DONALD IS THA’ BOMB ????

I’ll tell you:  She found out that she was going to run against George Holding in a district where he is dominant.  She realized conservatives are ticked at her, and she needs a gimmick to fire them up and bring them back.  *The rubes fell for it in 2010.  They’ll do it AGAIN.*

The Journal article expands on the motives for jumping to Trump:

[…] ,Another benefit for lawmakers with ties to Mr. Trump is he helps them cultivate an antiestablishment posture that is appealing to many voters these days.[…]

Boom. Exactly.  Ellmers has the nerve to attack Holding as a “Washington Insider” — even though she’s been there TWO YEARS longer than he has! 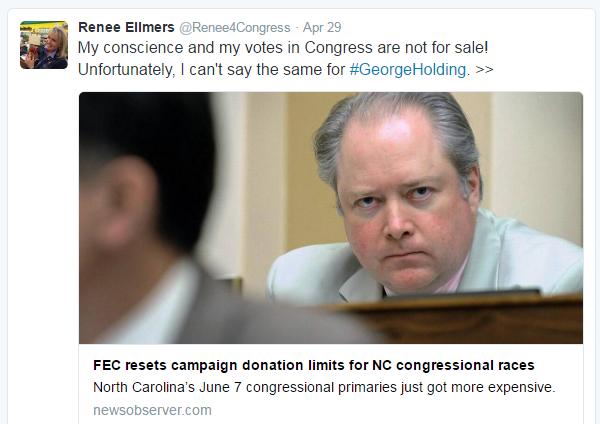 Whaaaaaaaa??? This is coming from a woman who took in ONE MILLION DOLLARS from DC-based PACs and special interests in the 2014 campaign.  Most of her money this time around comes from folks in the DC area who have personal interests before Congress.  So, this line of attack is the vilest form of hypocrisy. 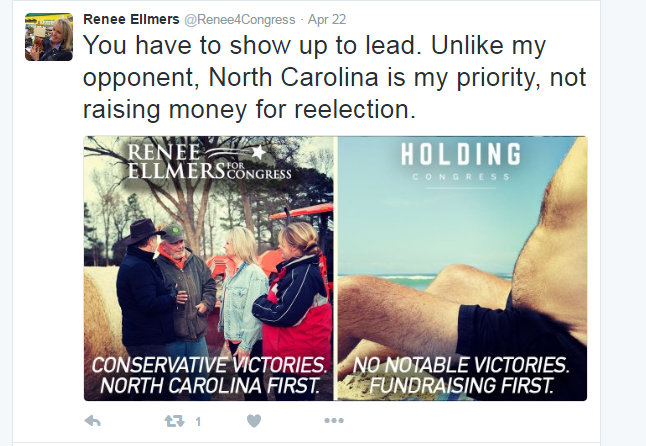 WHAT conservative victory is she babbling about?  Her effort to kill a ban on late-term abortion?  Her effort to revive the pork-laden special-interest giveaway known as the Ex-Im Bank? Her back-stabbing moves against people trying to kill ObamaCare? Her votes FOR amnesty for illegal aliens?

So, is giving the FCC even MORE power an example of a “conservative victory”? 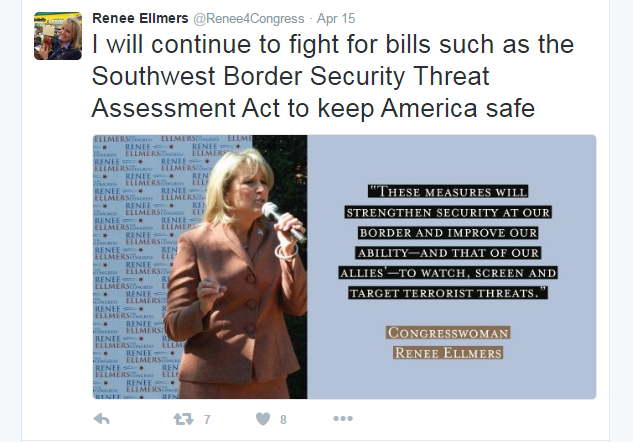 Whaaaaaaaaa??????  This lying lying lying lying, um, woman has been out there for amnesty every chance she can get.  She cussed out constituents who came to her office to try and talk some sense into her about amnesty. She lovingly addressed a rally by illegals in Asheboro.  She sided with Democrats on a number of efforts to salvage amnesty.

A shameful, damnable liar is what we have HERE, ladies and gentlemen.

15 thoughts on “#nc-02: Drivebys perplexed by Right’s rejection of Ellmers”