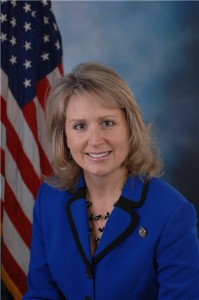 Wow.  That’s something you really don’t want to hear in reference to your REPUBLICAN Member of the US House.  The representative for North Carolina’s 2nd  U.S. House district was paid that “compliment” during her recent appearance on “All In with Chris Hayes” on MSNBC.

On the show, Ellmers laments the reversal of the air traffic controller furloughs while keeping the sequester “cuts” in place for cancer treatment.  (Remember, in the federal government, an eight percent increase over the previous year  is figured into each new yearly budget.  If you ONLY increase the appropriation by SIX percent,  the politicos bemoan a TWO percent cut.  Never mind that you are still spending SIX percent more than you did last year.)

Ellmers says on the show that she found out about these cancer treatment “cuts” when she visited a community cancer treatment center in Dunn.  Wait a minute?  Isn’t she up there voting on these spending bills?  Doesn’t she KNOW what she’s voting on before she votes on it?

So, Renee is sponsoring legislation to partially reverse the sequester and restore the “cuts” to federally funded cancer programs.

Instead of making the point that Big Barry determined WHAT was getting cut, and bashing him for aiming at maximum pain for “the little people,” Renee buys into the argument that congressional Republicans need to spend some more money.

Big Barry has cancelled Fourth of July celebrations at military bases, White House tours, and cut hours at parks — right in time for the summer vacation season.   The sequester hasn’t done a thing to slow down the vacations, parties, and concerts  for Barry, Michelle and the kids.

If you recall, the sequester came about as part of a bipartisan agreement between The White House, the Democrat-controlled Senate, and the GOP-controlled House.   The debt ceiling would be raised if a set amount of spending cuts were put into place.  If those cuts could not be passed by a certain date, the automatic sequester cuts would go into place.   Of course, the cuts did not happen — and here we are.

The media and the politicos moan and groan about how devastating these sequester “cuts” have been.  The sequester’s cuts in spending growth are about the same as the amount recently approved for Hurricane Sandy “relief.”

One thought on “MSNBC host to Renee Ellmers: “You and I are absolutely on the same page here.””