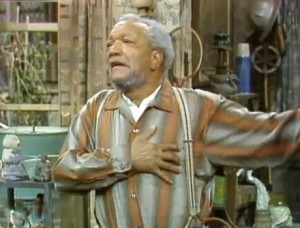 Charlotte Mayor Redd Foxx is movin’ on up —  just like The Jeffersons and The Clampetts.   Hizzoner has been tapped by Big Barry to be the new secretary of the Department of Transportation.  I couldn’t describe this development any better than the folks at The Wall Street Journal have:

It’s hard to find someone more out of their depth than Transportation Secretary Ray LaHood. Then again, the White House does have a stupendous flair for trying (see Hagel, Chuck).

But President Obama may be outdoing even himself by nominating Anthony Foxx, the mayor of Charlotte, N.C., to succeed Mr. LaHood. Mr. Foxx’s primary qualification for the job? He successfully lobbied for a $25 million federal grant for the first 1.5 miles of a proposed 10-mile streetcar. The grant will cover two-thirds of the first segment’s cost.

Oh, and he’s also fought really hard to raise taxes. For the past year the mayor has been demanding that the city council raise property taxes in order to extend the “starter street car” 2.5 miles for a total of four miles. The council has turned up their noses at his plan because a half-cent sales tax is already dedicated to supporting mass transit. Plus, the street car could be an unending drain on taxpayers.

As the Cato Institute’s Randal O’Toole has noted, street cars are among the least cost-effective modes of public transit. They cost between two and four times as much to operate as do buses on a per-mile basis while being no more energy efficient. They’re also much more expensive to develop and maintain. And Charlotte, by the way, already operates buses along the street car’s proposed route.

Mr. Foxx, however, insists that the street car is critical to Charlotte’s economic revitalization. “Without projects in the ground, we will experience the same sucking sound of sprawl that has driven investment and population away from cities all across the South,” Mr. Foxx declared in his state of the city address in February. That must be news to Houston, Nashville and New Orleans, which are among the country’s fastest-growing cities.

But then, the real reason Mr. Foxx and others on the left prefer street cars to buses has nothing to do with economic revitalization. It’s because street cars are limited in range and scope and therefore encourage people to live and work along a thin corridor, thus reducing sprawl. Developers who own property along the line are also particularly fond of street cars because they increase their property values.

It’s worth noting that the Charlotte street car qualified for the federal grant in large part because the Federal Transit Administration at Mr. LaHood’s instruction has gutted requirements for cost-effective analysis and written rules that give more weight to “liveability” as well as “social equity and environmental considerations,” including the “degree to which policies maintaining or increasing affordable housing are in place.”

Yep.  Ol’ Rush is right again about one thing:  Lefties LOVE to reward failure.  (Jimmy Carter, arguably the worst president prior to Big Barry, is celebrated as an American icon.  Hillary Clinton, arguably a stupendous failure as secretary of state, is the lefties’ frontrunner for 2016.)

As mayor, Foxx continued the tradition — started under Mayor Pat — of Charlotte having the highest tax burden in the state. He tried to jack up the food tax to pay for renovations to the Panthers football stadium.   The state is trying to snatch Charlotte Douglas International Airport away from city control.  Charlotte’s city manager has described the city, under Foxx’s rule, as being “in decline.”

One thought on “Mr. Foxx Goes To Washington”