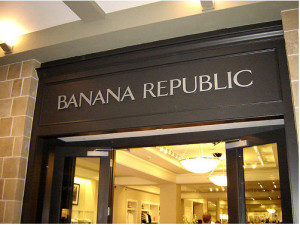 Senator Josh Stein (D-Wake)  and the Crayon Corps at McClatchy-Raleigh are really, really peeved at Sen. Bill Rabon (R-Brunswick.  What was Rabon’s offense?  He chaired a committee that pushed through legislation that would end North Carolina’s renewable energy mandate:

Over the objections of Democratic lawmakers, a Senate committee approved legislation Wednesday to end the state’s 6-year-old renewable energy program.

Opponents of the bill shouted “No!” when voting to show their frustration at Republican chairman Bill Rabon’s refusal to count votes with a show of hands. In what was clearly a razor-thin margin, both sides said they would have won if the votes had been counted.

“North Carolina is not a banana republic,” Democratic Sen. Josh Stein of Raleigh, one of the no votes, said after the meeting. “That was no way to run a proceeding.”

Hmm. Mr. Stein and the  McClatchy crayonistas apparently have very short memories.   I remember — and some honorables friendly with this site  do, too — the time period when Tony Rand and Marc Basnight ran the Senate and Richard Morgan and Jim Black ran the state House.  One of these honorables told me:

“Black or Morgan would be up there asking  if anyone wished to speak on a matter, or if anyone had objections.  Good conservatives like John Blust and John Rhodes would be standing on their chairs, or on their desks, waving their hands and shouting “Objection” or “ME!”.   Ray Charles would not have missed them.  But Black and Morgan somehow regularly did.   I bet it’s got to be tough being on the receiving end of stuff you used to dish out yourself on a regular basis.”

We get a few mentions about Republican defectors defending the mandate.  We heard about some special interests — who I am sure get tax breaks and grants for abiding by the mandate — criticizing the GOP legislation.  But we didn’t hear much about how the renewable energy has made little to no difference in air or land quality.  We also don’t get much in this McClatchy scribbling about how energy costs to consumers have shot up since the mandate was put into place in 2007.   (I thought lefties were all about saving the little guys some money. )
I happened to find some facts supporting the end of the mandate — that McClatchy managed to miss — published by The Heartland Institute:

In August 2007, Senate Bill 3 established a renewable portfolio standard (RPS) for the state of North Carolina, requiring utilities to generate 12.5 percent of retail electricity sales from renewable energy by 2021. Municipal utilities and cooperatives must meet a target of 10 percent of renewables by 2018. Up to 25 percent of the requirement may be met through energy efficiency technologies, including combined heat and power systems powered by nonrenewable fuels.

After 2021, up to 40 percent of the standard may be met through energy efficiency. The overall target for renewable energy includes technology-specific targets of 0.2 percent solar by 2018, 0.2 percent energy recovery from swine waste by 2018, and 900,000 megawatt-hours of electricity derived from poultry waste by 2014.

This system unfairly dictates what type of energy ratepayers must consume, forcing them to pay higher rates for more-expensive and less-reliable energy. It is also much more restrictive than programs in other states. By setting specific percentage requirements, the standard does not even allow renewables to compete with one another on a level playing field.

Energy consumption is not a problem; it is a solution. Research shows tremendous socioeconomic benefits ensue when efficient energy systems are created through market forces. Mandating the use of energy sources that otherwise would not be economical leads to artificial expansion of that industry and the decline of other industries, at a cost to consumers.

A repeal of North Carolina’s renewable portfolio standard would lower costs for consumers and foster job creation. This would produce more long-term economic benefits for the state than any temporary and artificial “green jobs” created by this mandate.

Point 1: Government should not be in the business of choosing winners and losers in the energy arena.

Point 2: It is impossible to know which energy technologies will be superior in the future, and policymakers should avoid pushing technologies to market before they are ready.

Point 3: Renewable energy is currently more expensive per kilowatt hour (kWh) than conventional fossil fuels, and those higher costs are being passed on to ratepayers.2

Point 4: Under the mandate, North Carolina’s GDP will be more than $140 million lower by 2021 than without the mandate.

Point 5: The mandate is a regressive policy that will most directly affect low-income families, who have the least capacity to absorb higher energy costs.

Point 6: North Carolina industries spent more than $215 million more on electricity in 2010 than they would have in the average non-RPS mandated state.

Duke Energy and its CEO are BIG supporters of the renewable energy mandate.  It’s an important component of their business plan.  A former Duke employee is now sitting in the governor’s office.  How does Gov. Pat feel about repealing the renewable energy mandate and saving consumers money on their power bills?  He appointed a turncoat Republican legislator, who voted to keep the mandate in place, to the state Utilities Commission.