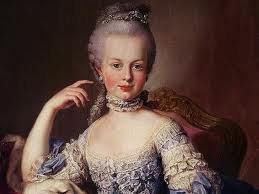 Apparently, some well-connected readers of this site voiced their displeasure to Americans For Prosperity’s North Carolina state chapter for their embrace of congresswoman Marie Antoinette Ellmers.™   AFP-NC had a big “Hands off My Health Care” event in Raleigh on Saturday — and Her Majesty took time off from telling the peasants to eat cake so the attendees at the AFP event could be honored with her presence.

Why on Earth — you ask — would AFP (a flagship group in the Tea Party movement) draft someone to be the face of their anti-ObamaCare fight who has (1) such terrible people skills, (2)  openly distanced herself from the Tea Party, (3) voted to sink us deeper into debt, (4) spoken openly about tweaking and replacing ObamaCare instead of killing it altogether, and (5) earned conservative effectiveness rankings of 59% and 31% out of a possible 100?

A well-placed source within AFP-NC, familiar with the matter, tried to explain the group’s take on the Ellmers invite:

“We know — overall — she’s been a major disappointment.  She talks a good game but doesn’t back it up on the House floor. Let’s face it, Renee has screwed up.  But she IS a high-profile opponent of ObamaCare. That’s what we were looking for on Saturday.”

My response to that is to review items #4 and #5 in the previous paragraph.

I have noticed that — since this was brought to AFP-NC’s attention — the group has deemphasized Ellmers and started emphasizing Wisconsin congressman Paul Ryan.

An organization such as AFP — which holds itself as a conservative grassroots vanguard — does serious damage to its credibility in the eyes of grassroots conservatives when it embraces politicians like The Honorable Miss 59%  (R-2nd district).

Where IS the conservative leadership in North Carolina? Why are our anointed conservative flagships like Locke and AFP watering down their beliefs and settling for 59 percent?

We HAD John Blust and John Rhodes in the NC House.  Richard Morgan recruited Thom Tillis to take out Rhodes in the 2006 GOP primary.  Blust got married, and got REAL quiet.

In the 1990s, we had — at one point — Jesse Helms and Lauch Faircloth giving us unabashed conservatism in the U.S. Senate.  Now, we have Richard Burr brown-nosing Lindsey Graham and John McCain, and a US House delegation where our most conservative member doesn’t even make it into the TOP 50 list of most conservative US House members.

We’re on the battlefield and the flag is falling. We need a leader — a hero — to go pick up our banner and rally the troops to charge on.

One thought on “More on AFP & Renee”