”[…] And so even though we face the difficulties of today and tomorrow, I still have a dream. It is a dream deeply rooted in the American dream.

I have a dream that one day this nation will rise up and live out the true meaning of its creed: “We hold these truths to be self-evident, that all men are created equal.”

I have a dream that my four little children will one day live in a nation where they will not be judged by the color of their skin but by the content of their character. […] ”   — Martin Luther King, Jr  August 28, 1963

‘“[…] A ventriloquist can always find a good dummy,” Rev. William Barber II said of South Carolina Republican Sen. Tim Scott, according to South Carolina’s The State. “[T]he extreme right wing down here (in South Carolina) finds a black guy to be senator and claims he’s the first black senator since Reconstruction and then he goes to Washington, D.C., and articulates the agenda of the Tea Party. […]”   — North Carolina NAACP president William Barber  January 20, 2014

Yep.  *The civil rights movement sure has come a long way.*   Tim Scott, a black South Carolinian whose life epitomizes what MLK was talking about in his famous 1963 speech, is being attacked by one of the alleged heirs of King’s legacy.  Barber champions an agenda that has trapped more black Americans in poverty, unemployment and the criminal justice system than at any time in American history. 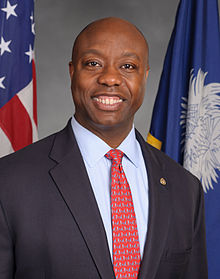 Scott — a successful entrepreneur who has been elected to his state legislature, county board of commissioners, and the US House of Representatives by overwhelmingly majority white jurisdictions — is a living, breathing example of King’s 1963 words coming to fruition.  (Scott was appointed by Gov. Nikki Haley — A Republican woman of Indian descent, by the way — to fill the US Senate term of Jim DeMint.)  He is a threat to the agenda of Barber and his white liberal puppet masters which has — as its centerpiece — complete and utter dependence on the government bureaucracy.

Scott demonstrates to all of black America that you can work hard — and with white people — to become successful in America.  To Barber and his fellow leftists, THAT is a problem.  Their mission is to keep black people poor, angry and standing by to overwhelmingly deliver votes for the Democrat Party.

In the eyes of Barber and his rabble, if you study and work hard, use proper grammar, take responsibility for yourself and your family, and work well with people of other races, your authenticity as a black person is in question. This makes them no different — and no better — than the rabble that threw eggs and rocks at MLK and his followers during the 1960s.

On this day after MLK Day, I am going to live by MLK’s famous words from 1963 and judge US Senator Tim Scott (R-SC) AND Rev. Bill Barber  by the content of their character.

6 thoughts on “Memo to The Round Rev: It takes ONE to know ONE”