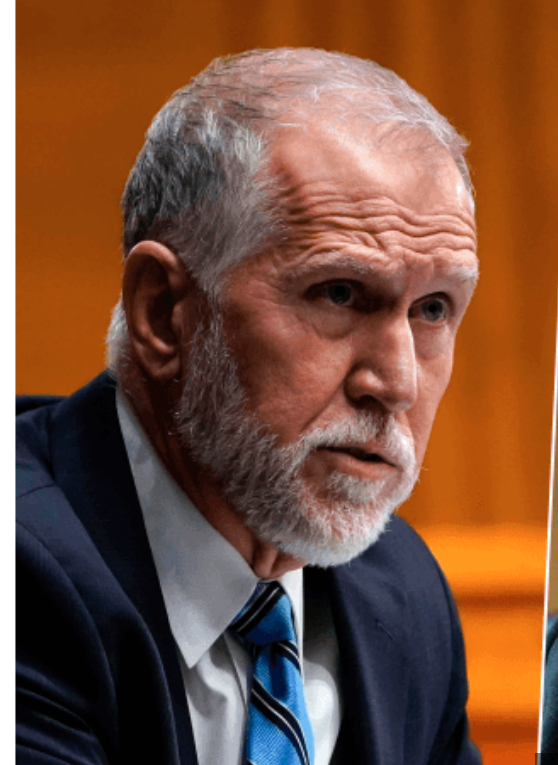 The 2020 Senate race was pretty much all about Cal Cunningham’s sex life.  Yet, he still ran respectably close to incumbent Thom Tillis.  In 2014,  Tillis barely crept past very-beatable Kay Hagan.  Two very close races in winnable contests hasn’t taught Thom a thing.  He’s STILL talking out of both sides of his mouth. Still looking to hook up with Democrats.  Still viewing the lobbyists and PACs as the constituents he has to please.

In races featuring Tillis, we are frequently left with the choice of voting for the lesser of two evils.

In 2020,  every sentence spoken by ol’ Thom and his campaign featured the word “Trump.”  (Never mind that Tillis verbally trashed Trump in DC, and frequently helped toss monkey-wrenches into the implementation of Trump’s agenda.)

Now that Tillis is safely back in DC for six more years,  check out what he’s up to:

Despite persistent and worsening polling on the Biden administration’s handling of immigration, two Senate Republicans on the Judiciary Committee are trying to make an amnesty deal. In a July 6 letter to Chairman Dick Durbin (D-Ill.), Sens. John Cornyn (R-Texas) and Thom Tillis (R-N.C.) requested that the committee schedule an executive business meeting for a bill to “offer permanent legal status to only currently enrolled and activate participants in the Deferred Action for Childhood Arrivals (DACA) program”.In making their case, the Republican senators state that “there is no clear and politically viable path forward” for the American Dream and Promise Act, which would amnesty at least 4.4 million illegal aliens, and that a narrower bill is more viable. According to U.S. Citizenship and Immigration Services data, there are approximately 616,030 illegal aliens who are active DACA recipients.

Curiously, Cornyn and Tillis are advocating for a DACA amnesty despite calling the DACA policy unlawful. “We agree [with district judge Andrew Hanen’s 2018 preliminary injunction] that the DACA program contravenes the Immigration and Nationality Act and believe it was likely unconstitutional when issued by President Obama,” the Republican senators wrote. The senators requested that Chairman Durbin allow committee members to offer “reasonable” amendments to the bill, including “proposals related to border security, interior enforcement, and employment verification programs”. In closing, the senators claim that “[s]uch a process will allow us to develop a package that can garner the support necessary to pass on the Senate floor.”

While Chairman Durbin has not yet publicly responded to the letter, the prospects of a DACA-only amnesty receiving a Judiciary Committee markup right now appear slim.First, Democrats are trying to ram through a larger amnesty via reconciliation, a budgetary process that only requires 51 votes (including Vice President Kamala Harris) to pass, compared to the 60 votes required to overcome a filibuster. Even if the Senate parliamentarian, the person responsible for interpreting Senate rules, concludes that reconciliation is an impermissible avenue to pass immigration legislation, advocates for unlimited immigration have already signaled opposition to the Cornyn-Tillis plan.

Now,  imagine if Tilli$$$ gets a “Senator McCrory” to help him with shenanigans like this.

2 thoughts on “Meet the new Thom, same as the old Thom …”