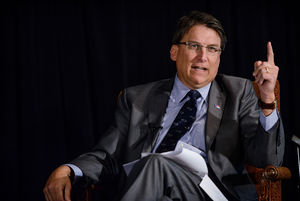 Our Republican governor made it clear he is thoroughly unimpressed about the current debate on the Religious Freedom Restoration Act:

Gov. Pat McCrory appeared on WFNC radio in Fayetteville Thursday morning and reiterated his effort to prevent North Carolina from being swept into the political maelstrom that engulfed Indiana and Arkansas over religious freedom and gay rights.

“Let me criticize both the left and the right: I think it’s a manufactured controversy on both sides,” McCrory told host Jeff “Goldy” Goldberg on the Good Morning Fayetteville talk show. They are using it for their fundraising efforts, he said.

“I don’t think it’s a bill you need, and I think it’s an overreaction to a bill you don’t need,” McCrory said. The constitution already protects religious liberty, he said. […]

Manufactured, huh?  We just had legislators attempting to wipe out a religious exemption for vaccinating children.  Out west, you’ve got “human relations” bureaucrat-nazis trying to bankrupt a florist, a baker, and a photographer for daring to refuse to participate in gay marriages.  A driveby interviewed an Indiana pizza parlor owner who dared to say: “We’ll serve anybody who comes in here with money to spend, but no we will not cater a gay wedding.”  The owner and his staff started getting death threats within 15 minutes of the airing of that news report.  The pizza restaurant had to shut down.

Their Christian beliefs don’t seem to matter to the tolerance crowd.  Yes, the First Amendment is still in the Constitution.  But we’ve got examples all over the state and country of leftists trying to eat away at it or wipe it out altogether.

The politicians, the consultants, and the drivebys are doing their best to try and kill this discussion off with disinformation and outright lying.  The Democrats pushed a Religious Freedom Restoration Act through at the federal level in the early 90s.  Their motive at the time?  To allow an Indian tribe to smoke peyote — as part of their reported religious practices — without running afoul of federal drug laws.  Back then, this law was a wonderful idea.

A court case came along suggesting that people filing in state courts could not claim the RFRA as part of their defense.  So, state legislatures began passing their own RFRAs.  More than half of the states in our union have these laws on the books or are in the process of passing them.

Now, when the law is being used to protect Christians (as opposed to legalizing drug use in certain cases), the left is BENT OUT OF SHAPE. Talk about something coming back to bite you in the tush.

It appears that the boy speaker of the NC House has also caught the boy governor’s foot-in-mouth disease:

[…] The bill appeared to be set to speed through the House. On Tuesday, Republican state House Speaker Tim Moore put the brakes on.

He didn’t kill it, but said it needs careful review before it advances.

“The religious freedom bill, of course, is important because it’s important to a number of members of my caucus,” Moore said. “My thought, is though, that the high priorities we have right now are about job creation, improving our roads, improving education. I want to find out how this bill accomplishes those objectives. And what does it do to move North Carolina’s brand forward? And so it’s going to require some discussion.” […]

Moore appears to disqualify the bill because it does not fit the categories of “job creation, improving our roads, [or] improving education.”  Okay.  Here is the House calendar from April 2.  Take note of how many things on this calendar do not fit Moore’s categories.

And, as far as “mov[ing] North Carolina’s brand forward” goes, I would think that taking a major step to protect North Carolina residents’ deeply-held religious beliefs (and First Amendment Rights) from being trampled upon by the government leviathan would greatly enhance North Carolina’s reputation and overall quality of life.

8 thoughts on “#ncga: McCrory, Moore and the “manufactured” threat to religious liberty”