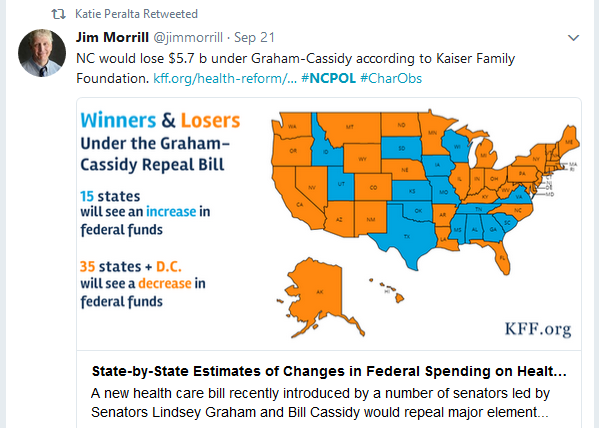 What this bill does is scale back the expansion of Medicaid promised in ObamaCare.  How do you LOSE money you never had in the first place 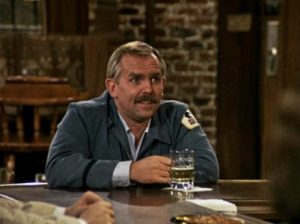 ? It’s government-speak gobbledygook — kinda like calling a reduction in the increase in spending for the next year a “cut.”

Graham-Cassidy is simply taking the centralization of power in DC under ObamaCare and shifting a lot of it to the state governments.

The honorables in DC have blown up our economy so badly it’s all imaginary money anyway.  IOUs are getting passed around like Halloween candy.  (It’s reminiscent of Cliff Clavin writing Norm that check for ONE ZILLION DOLLARS.)

First, you have to love these driveby types who quote Kaiser unchallenged.  Kaiser is one of the most liberal think tanks out there.  Ninety-eight percent of their employees’ campaign donations went to Democrats.   Their pronouncements almost always toe the statist / Democrat line.

And then there is the problem of the hysterical ranting of the drivebys, the Democrats, and their associated think tank henchmen about the Republicans reportedly destroying Medicaid.  Here’s some interesting food for thought from Civitas — back in the day when they had cojones:

The popular image of Medicaid is that of a small program that provides basic but good-quality medical care to a limited, impoverished segment of North Carolina’s population – and that politicians have skimped on funding it. The reality is different.

[…]  North Carolina’s Medicaid program is the state-run health insurance program for “low-income individuals and families who cannot afford health care costs.”[1] There are a number of groups eligible for the state’s Medicaid program, including children, disabled people, the elderly, otherwise healthy adults, pregnant women and the blind. Medicaid is a “means-tested” program, meaning that individuals must have incomes below a certain threshold to be eligible. The income threshold varies according to an individual’s situation, i.e. blind, disabled, etc.

Some people may think of Medicaid as covering only a limited range of care, but that’s far from the case. Medicaid covers a majority of potential medical care services, including regular doctor visits, hospital stays, and mental health, vision, dental and nursing home care.[2] The program is a fee-for–service program. In short, Medicaid enrollees “purchase” medical care services, and the service providers are reimbursed by Medicaid, with some services requiring a minimal co-payment by the patient. The payment fees for medical services to service providers are established annually according to the directive of the General Assembly. Indeed, each year the Medicaid program sets and adjusts roughly 500,000 rates for more than 200 different provider types within 200 different billing specialties.[3] Yet, as we will see, such micro-managing of the health system has failed to either control costs or ensure good care.

Also, if Medicaid brings up an image of a small number of very poor people, think again. Total Medicaid enrollment in North Carolina in FY 2009 (the latest data available) was 1.8 million, or about 19 percent of the population.[5] Total Medicaid spending (state and federal dollars) in North Carolina that year was $10.9 billion. The three largest expenditures in the Medicaid program are reimbursements to inpatient hospital stays, nursing facilities and prescription drugs – each consuming roughly $1 billion in total Medicaid spending.

Of the wide variety of medical services covered by North Carolina’s Medicaid program, some are mandated by the federal government — but many more are optional. As of 2009, North Carolina covers all but two optional services allowed by Medicaid – one of the more generous programs in the nation.[6]

With such factors affecting other states, too, growing Medicaid budgets are soaring at a rapid pace across the country. North Carolina is a prime example of that explosion in costs. For example:

Driving the growth of the Medicaid program are significant increases of both enrollees in the program and health care costs in general.

Costs are sky-rocketing.  The problem of fraud is burgeoning.  *But never mind THAT, the libs tell us.  We need to fork over more money and get more people on the dole.*

2 thoughts on ““Losing” that Obamacare money”