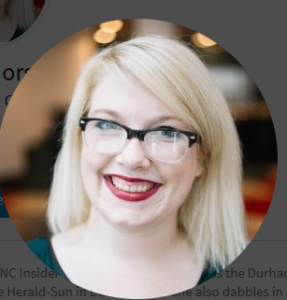 The N&O’s new legislature reporter Lauren Horsch — who most recently scribbled for the horridly leftist IndyWeek — is employing some of the same agitation tactics her former employer is so famous for. According to Lauren, it IS an outrage that the percentage of women who reside in North Carolina is much higher than the percentage of the General Assembly that happens to be female.

It can’t simply be the fact that many many women just aren’t interested in running for office.  (*It can’t be that not so many have run. It’s GOT to be bigotry.  GOT TO BE.*)

Lauren even hauls out Bev Perdue — who, by the way, is a horrible example to bring up if you are trying to convince the voters to elect more women —  to try and illustrate her point.

I don’t believe there is a significant number out there who say: “Hmmm, he’s a DUDE. I’m voting for him.”

(I have come across people who make candidate choices based on dumb things like, oh, the candidate shaking their hand at the grocery store, or the candidate being next-door neighbors and best buds with cousin Eddie.)

Name ID is probably the biggest thing voters key on.  Many others also look to stands on the issues. 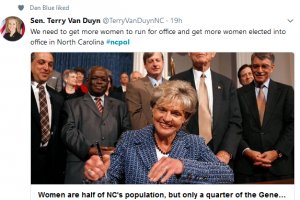 Now, you KNOW Lauren and many of the others screaming about this, um, “outrage” would cringe mightily at the idea of voting for, say, Nicole Revels or Fern Shubert.  (Two politically active women here in North Carolina who see things from the RIGHT side of the fence.)  The word WOMEN to those people equals diehard allegiance to taxpayer-funded abortion-on-demand-and-without-apology and pretty much the entire text of Marx’s Communist Manifesto.  (Just like the folks who blast Ben Carson, Herman Cain, and Clarence Thomas as not being sufficiently “black” because they view things from the RIGHT side of the fence.)

Candidates should be evaluated on ethics, talents and their stands on the issues.  NOT biological traits they are born with.

3 thoughts on “Let’s (NOT) play the victimhood game”