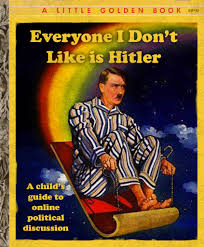 Blame Christians for the 2016 mass murder at an Orlando gay night club?  *Yawn.* Not a peep from the driveby media or the rest of the professional left. But dare to cite Lincoln in a  debate on political tyranny?  Off with Larry’s head! It’s on like King Kong.

It’s pretty clear the political Establishment hates Rep. Larry Pittman.  Rep. Bill Brawley — an alleged Republican from Mecklenburg most famous for being up to his shiny bald head in all of Thom Tillis’s sleazy cronyistic deals — is joining with the leftists at IndyWeek to slap at Pittman on Twitter with a #NCforLincoln hashtag.  (Funny.  North Carolina sure didn’t think much of the man when he actually was president.)

Hmmm.  Aiding and abetting the hijinks of IndyWeek.  Gotta love those Mecklenburg Republicans.

WRAL’s Laura Leslie — even after her multiple outrageous 2016 social media posts — has the nerve to be out there tut-tutting at Pittman.

One of her fellow gay rights activists has sunk to a new low in lashing out at Pittman: 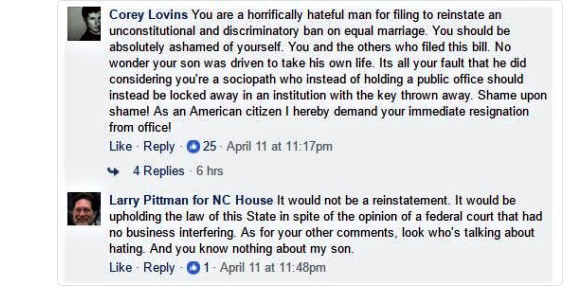 Yep.  Pittman’s son did take his own life some time back.  And YES the leftists used that event THEN and even TODAY to somehow blame and shame Pittman.  I don’t know about you — but that is PRETTY LOW to attack or shame someone over their child’s suicide.  All politics aside.  It’s a matter of human decency.  A member of the “peace, love, and understanding” crowd should know better.